How will CTV impact the passion for YouTube UGC?

YouTube is the most popular source of video in nine countries surveyed by Google. Most viewers are watching through smartphones and tend to prefer shorter and user-generated content. But what will happen as more viewing shifts to the connected television?

Survey data released by Google illustrates the profound impact that YouTube is having on our viewing habits. The company asked 12,000 people in nine countries about what they had watched and where they had watch it in the last 24 hours.

Not surprisingly, YouTube was far-and-away the most-watched of all the services. 78% of respondents said they had watched YouTube in the previous 24 hours. Pay TV was in second place overall, with around 73% of respondents using it. (39% watched cable and 28% satellite TV.) SVOD was in a distant third place, with 45%. Facebook was fourth with 43%.

Google went on to ask the survey respondents why they watched what they watched. The most common answer – selected as number one by 10.3% of respondents – was that the video helped the respondent to relax and unwind. However, the influence of YouTube was evident in many of the other selections. The social site excels at letting people engage with their passions and interests, and those values tended to rank higher. For example, “teaches me something new” (8.6%) and “allows me to dig deeper into my interests” (8.2%) were the second and third most popular reason. 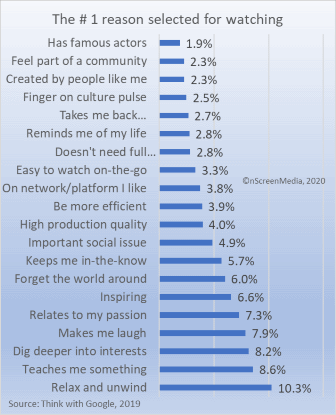 Traditional media values tended to rank lower in survey respondents’ reasons for watching. For example, “has famous actors” (1.9%) was last, and “high productions quality” (4%) ranked at number ten. However, it looks like Google did not offer respondents some reasons that would play to SVOD and pay TV strengths. For example, “I watched the next episode of a favorite show” does not appear to have been an option for respondents to select.

According to Google, the general trend of passion and interest driving the viewing habits of people seemed to hold across the nine countries included in the survey.

Similarly, 49% of Gen Z respondents said they for user-generated content versus 29% of Gen X and 27% of Boomers.

YouTube and Google are very much focused on boosting viewership through the TV. They have every reason to do so since connected TV (CTV) viewers watch far longer than smartphone viewers. For example, Freewheel reports that in the U.S. in Q3 2019, 56% of ad views were delivered via CTV and just 14% via mobile.

Today, one-quarter of the 1 billion hours consumed daily on YouTube is through the television screen. As TV consumption increases, it wouldn’t be surprising to see the motivations of viewers shifting toward more traditional TV values, like higher quality and longer videos. If the shift toward CTV continues, it will also affect the creators, the lifeblood of the YouTube experience. It could force them to compete more directly with values delivered by traditional media, marginalizing the UGC approach that is so popular today.

Today, YouTube is the most popular source for video around the world.

Most of the video watched is on smartphones and is short-form and user-generated.

As CTV consumption increases, viewer tastes may shift toward traditional TV values making it harder for YouTube creators to compete.