Young Europeans leaving the TV past behind

Online is now the primary source of TV for more German, Swedish, and British youth than either pay TV or free-to-air. However, big SVOD libraries don’t absorb all their time. TVOD is more popular with the young than the average adult.

In the 2019 free nScreenMedia report TV Universe – UK, Sweden, and Germany: How people watch television today, sponsored by Gracenote, the viewing habits of adult TV viewers are revealed. For example, the report shows that 17% of the UK TV audience watches free-to-air, pay TV, and online TV. Almost half of the young watch TV from more than one of the three primary TV sources.

The data also shows that the TV viewing behavior of young people between 18 and 24-years-old differs markedly from the average adult. In the case of transactional VOD, the difference is surprising.

In each of the three countries covered by the study, traditional TV sources remain the most popular for the average viewer. For 18 to 24-year-olds, however, the picture is quite different. In Sweden and the UK, online is considered the primary source of TV by most young people. 54% of UK and 61% of Swedish 18-24s think online TV primary. Even in Germany, where free-to-air (FTA) TV continues to dominate, almost half of the 18-24s prefer online TV.

The data suggests the FTA TV is not connecting with young people. Just 8% of Swedish and 10% of British 18-24s consider it their primary source of TV. Though FTA dominates in Germany, it is cited as the primary TV source by 25% of the young, fewer than pay TV and far behind online. National broadcasters are in danger of losing their voice with the young, who increasingly spend their time with global brands like Netflix and Amazon Prime Video. 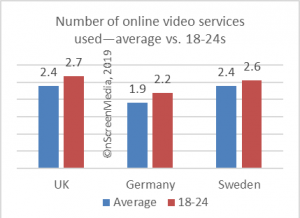 Renting and buying movies more popular with the young

Young adults have not totally given their viewing over to big viewing libraries provided by Netflix and YouTube. More of them say they rent movies and shows than the average in each of the countries covered. The UK shows the most significant difference, where nearly half of 18–24s say they rent versus a third on average. 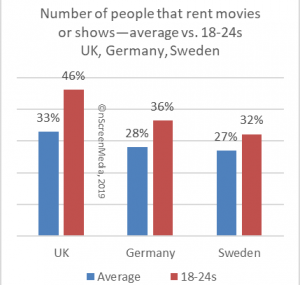 We see the same pattern with movie purchases. Far more 18–24s say they purchase movies or TV shows than the average. German and British young people exhibit the difference most sharply.

Unsurprisingly, the young much prefer digital sources of movies over renting or buying discs.

The TV Universe Report provides a full view of the TV viewing habits of German, British, and Swedish viewers. Some of the things you will learn from the report include:

Download your free copy of the report today. If you would like to sponsor the creation of the same report for the US or another market, send us a message.

Most adult Europeans consider pay TV or free-to-air to be their primary source of television.

The young also use transactional VOD models more than the average adult.