Analysts agree that 2020 will be huge for the growth in free ad-supported TV (FAST) online. Announcements at CES show services providers are leaning into the opportunity.

Analysts agree, 2020 will be big for AVOD

Last week, as part of a piece discussing the top three trends to watch in 2020, I highlighted what a great year I’m expecting for free ad-supported video services. I’m not the only analyst forecasting strong growth in the category.

Ampere Analysis says that only 3-6% of U.S. households currently use ad-supported online video services. However, the company thinks that a shift in the emphasis of SVOD providers should help ad-supported services thrive in 2020. Ampere says that the number of titles in Netflix’s library five or more years old has shifted from 50% in 2015 to 35% today. Other services have similarly focused on original titles.

As SVOD shifts towards originals, many viewers still crave a steady diet of the old and familiar. Free ad-supported TV (FAST) services can satisfy the desire. Services like The Roku Channel, Pluto TV, Xumo, and Tubi focus on older premium titles in their services. Moreover, if announcements in and around CES 2020 are anything to go by, FAST services are leaning into the opportunity.

The smart TV is one of the most significant battlegrounds for FAST providers. A FAST provider gets an enormous advantage from being available directly from the device’s native streaming app. Consider that the first thing a new smart TV does when turned on is to walk a user through connecting it to the home Wi-Fi. It then launches the native streaming app and a user is immediately watching TV. 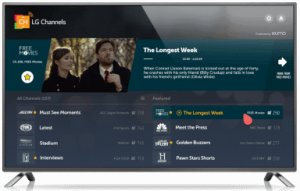 Xumo provides free ad-supported linear experiences online. Last week, the rumor surfaced that Comcast may acquire it. The deal could be even more attractive to Comcast as Xumo says it has added Sony and Panasonic as distribution partners.

Tubi provides free ad-supported on-demand access to over 20,000 titles and claims an audience of 20+ million monthly active users. That number could increase because the company has just reached an agreement with Vidaa International, a subsidiary of the third-largest TV manufacturer in the world, Hisense. The Vidaa streaming platform -including the Tubi library of content – will launch in the spring on Hisense TVs in the U.S., Canada, and Australia.

While Pluto TV didn’t have any new distribution deals to announce at CES, it seems to be gearing up for a big first quarter of 2020. The ViacomCBS-owned company launched a new logo at CES and will be using it to spearhead a huge consumer marketing campaign for the service.

“Its impact will be felt not just by the entertainment industry, but by advertising too as the shift that has already disrupted the subscription television market sweeps across the free-to-air sector.”

In the U.S., the impact will be felt just as sharply by ad-supported cable television channels.