World Cup wrap-up: streaming records tumble across the board

The 2018 World Cup was the most streamed sports event in history. Concurrent streamers, peak bandwidth used, and authenticated viewers all smashed existing records.

What you need to know

FOX authenticated streaming set a record with 552,000 average-minute audience. The previous record was set for the 2018 NFC Championship game of 468,000.

vMVPDs saw record usage. Conviva, which handles 4-of-5 of the top vMVPDs, saw a record 9.12 million concurrent plays during the World Cup final. The previous record, 5.5 million, was set during the 2018 Super Bowl.

Akamai Technologies saw the peak bandwidth demand of 22.52 Tbps during the semi-final between France and Belgium. The record from the 2014 World Cup was 6.88 Tbps.

Following the elimination of the US from the World Cup by a loss to Trinidad & Tobago in the qualification stage, Business Insider journalists hailed it as a disaster for FOX. How wrong could they have been! FOX paid $200 million for the rights to broadcast the tournament, and it looks like money well spent.

FOX and FS1’s World Cup coverage accounted for all of the top 20 shows among 18-49-year-old men during the last month of the 6-week tournament. The final between France and Croatia was the most watch non-NFL broadcast of any kind on FOX in 2018. It attracted an average audience of 11.8 million across FOX TV and streaming platforms. An even more remarkable achievement when you consider the game started at 11 AM Eastern, 8 AM Pacific. 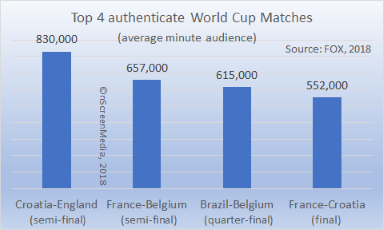 The final also set streaming records. It attracted an average-minute audience of 552,000 on FOX’s streaming platforms. The 2018 NFC Championship game, which previously held the record as the largest authenticated Sunday event on FOX attracted 468,000.

When the 2014 World Cup played out in Brazil, the only way to watch every game was through a pay TV operator. In the four years since, vMVPDs like YouTube TV, Sling TV, and DirecTV Now have acquired millions of subscribers. Each of the top vMVPDs carried Fox, FS1, and FS2 allowing subscribers not to miss a moment of World Cup action.

Conviva also tracks stream play attempts and the resulting successful plays.[i] The final between France and Croatia was the most streamed game, attracting 41.2 million attempts resulting in 34.9 million plays.

The World Cup was also a boon to vMVPD sign-ups. fuboTV, which has staked its claim as the sports leader among the vMVPDs, has a record 900,000+ app downloads during the tournament. The fubo TV app was the #3 most downloaded app in the App Store during the July 2 Brazil-Mexico match. The FOX and Telemundo apps took the top two spots.

Overall, vMVPDs performed very well during the World Cup. There was only one major incident. YouTube TV went down for an hour just before the second half of the England-Croatia semi-final match.

The World Cup was the most streamed event in Akamai Technologies history, driving a greater volume of data in 11 days than the entire Rio Olympics in 2016. The highest traffic peak was reached not in the final, but the semi-final between France and Belgium. The game reached a peak of 22.52 Tbps[ii], exceeding the final’s peak of 20.66 Tbps and the peak of 6.88 Tbps set in the Brazil World Cup. 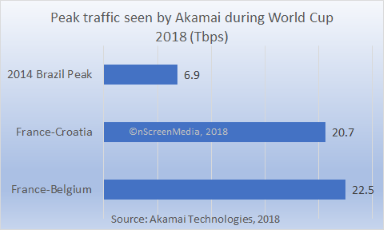 Akamai supported 55 broadcasters around the world in streaming the World Cup. The company delivered a peak of 9.7 million concurrent streams when two group matches between Mexico and Sweden and South Korea and Germany occurred at the same time. 7.9 million streamed the final.