There is a wide divide in the vMVPD market, between those services that provide sports and those that do not. The largest services include sport and, according to new data, need it to drive growth. Unfortunately, sport license fees are also one of the most significant factors driving the increase in pay-tv subscription fees.

Sport important to many vMVPD users 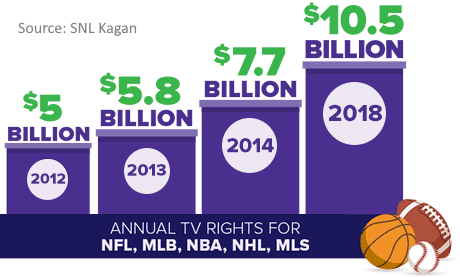 Not all vMVPDs provide sports programming. For example, Philo and AT&T’s Watch TV omit sports entirely. However, providers such as YouTube TV, fuboTV, and AT&T TV Now have made sport a key focus. These providers could be headed for trouble as sports are one of the biggest drivers of the increase in pay-tv subscription fees. Kagan estimates that the annual U.S. TV rights for the NFL, MLB, NBA, NHL, and MLS leagues more than doubled between 2012 and 2018, to reach $10.5 billion.

A sports fan most likely would opt for PS Vue’s $55 per month Core package. The tier includes most of the ESPN channels as well as NFL, NHL, and NBA TV. It is $5 more than the entry-level package, though the price difference is liable to widen once the license fee increases Disney likely won in the deal are factored in.

To get an idea of the impact of sports on the price of pay-tv services we can look at the newest vMVPD entrant, Vidgo

Sports-light Vidgo launches at $15 per month

Vidgo has just launched with a basket of 49 channels including Viacom’s Discovery, Nick Toons, and HGTV, and cable staples like History, A&E, and Hallmark. It costs $14.99 a month.

Sports are not totally absent from the offering as beIN sports and PAC12 Network are provided. However, the sports-essential networks from ESPN and Fox are missing, as are regional sports networks. Other channels present in PS Vue are also absent from Vidgo. Most notably, local ABC, NBC, Fox, and CBS channels are not provided, and neither are the big news channels.

The missing locals and news channels likely cost around $15 per month per subscriber in license fees. The rest of the $25 difference in price between Vidgo and PS Vue’s sports-laden tier Core is likely mostly from sports.

Sport is a critical component in attracting new subscribers to vMVPDs.

Sport license fees have exploded over the last seven years and help explain the wide cost differential between some vMVPDs.

Those providers focused on sports channels are much more vulnerable to further price increases than those that omit them.