The challenging environment for vMVPDs has not deterred the sports-oriented Vidgo from jumping into the fray. Will its novel approach to mobile viewing be enough to help it carve out market share?

It is a challenging time for the vMVPD industry. Though it is barely six years old, cracks are already showing in the industry’s fundamentals. Above inflation price increases swept through the industry in 2019 as services wrestled with low to non-existent profit margins, and continued programming license fee increases. The industry also faced its first major failure, with the announcement that PlayStation Vue would shut down at the end of this month.

Other providers are even recommending subscribers cancel their vMVPD subscription when they are not using it. Hulu, which increased the price of its Live vMVPD a whopping 22% in December, told customers through its blog:

“Price changes are never easy to stomach, and we know that many people don’t watch live television year-round, so we’ve made it easy for Hulu subscribers to switch back and forth between our plans to best suit their needs. If you love college football, choose Hulu + Live TV during the season, then switch to one of Hulu’s less expensive on-demand plans when it’s over.”

It is this unfriendly environment that awaits new vMVPD service Vidgo. The sports-heavy service opened its doors to subscribers on Monday. Vidgo provides two primary levels of service: The Core Plan, which costs $39.99 a month for 68 channels and the Plus Plan for $49.99 and 84 channels. There are also two Spanish language tiers offering up to 27 channels from the US, Mexico, Central and South America, and Spain for $14.99 and $24.99 a month.

All the usual sports channels are here, including seven ESPN channels, FS1 and FS2, beinSports, and NFL Network. Most regional sports networks are not available. There is also plenty of entertainment and family viewing to be had, including channels from Discovery, Viacom, and Fox. Locals from ABC and Fox may be available in your area. Missing from the lineup are channels from Disney, NBCU, and CBS, among others. 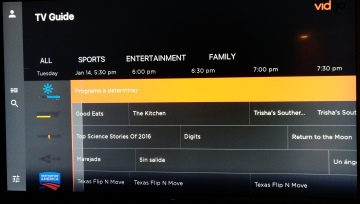 The Vidgo guide is tough to read on Roku

I tried the service out on a Roku connected to a 65” UHD TV. Picture quality was excellent and channel change time was acceptable. However, the experience was disappointing overall. It felt like I was watching TV back in the ‘90s. I couldn’t pause any of the channels I tried and there is no DVR functionality available. As well, I found the color selection in the guide made it extremely difficult to read the channel labels. The lack of pause and DVR controls will be a deal-breaker for many. Hopefully, these are features Vidgo will introduce soon. 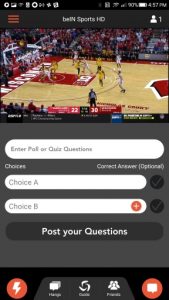 The folks at Vidgo have dubbed their mobile viewing “Social TV.” The android and iOS apps allow you to watch with friends using the service. You can create a viewing “room,” invite friends to watch with you, and chat with them through the app. As well, you can create polls to send to the viewing group.  Oddly, I found pause worked through the mobile app, though I couldn’t figure out how to get back to live TV as there didn’t appear to be any fast-forward and rewind functionality.

Overall, Vidgo will have a tough time differentiating itself. To be sure, the mobile experience is unique among its peers. However, it might not be enough to lure prospective customers, as there are many other choices available. For sports fans, fuboTV has a more varied selection of sports channels (though it lacks ESPN), and a DVR for $54.99 a month. For non-sports fans, Philo at $20 a month provides a more entertainment-oriented channel selection and includes DVR functionality at no extra charge.

Growth in the vMVPD market is slowing due to several factors, including above-inflation price increases.

Any service launching in the current environment will struggle to find an audience.

New service Vidgo lacks key functionality and channels. It will need to fill these gaps quickly without increasing prices if it is to stand a chance.

CandW discuss why sport divides and defines the vMVPD market