It’s been over two years since the first virtual MVPD was introduced. comScore says that vMVPD growth is steady, but they aren’t standing still. They’re busy improving features to gain ground on traditional pay TV. 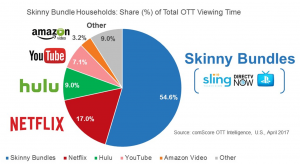 distributors (vMVPDs aka skinny bundles). The company only counted Sling TV, DirecTV Now, and PlayStation Vue in its numbers. Since there are three other services (YouTube TV, Hulu Live, and FuboTV,) the number of households is probably more than that.

It won’t come as a surprise that these households use the vMVPD services just like pay TV. They watch the services for 5.3 hours a day. Interestingly, vMVPD viewing accounts for over half the online video viewing in those households. As well, rather than using a game console or smart TV, 91% use a streaming media player, like a Roku or Apple TV.

One stumbling block stopping consumers adopting a vMVPD has been a lack of DVR services. That is beginning to change as more services provide them, and others improve existing features.

Sling TV charges $5 a month to store 50 hours of content, and does not restrict the number of simultaneous recordings a user can make. In addition, it is making it easier for consumers to manage their recordings. It has introduced folders, to organize DVR, live, and on-demand episodes of show. As well, if a consumer tries to record a show that is available in the on-demand library, the user is taken directly to the on-demand copy.

Sling TV is also expanding the number of channels that can be recorded. It has just added Fox channels to the list, including Fox, FX, and Fox Sports.

FuboTV provides DVR functionality for free as part of its $34.99 monthly subscription service. To date, that functionality has been very limited. The company has just expanded the number events/shows that can be recorded from just 3 to 10. However, the introduction of lookback functionality may blunt the impact of such limited DVR capabilities. Lookback allows viewers to watch shows and games aired in the last 3 days. Given FuboTV is focused on soccer, lookback may well provide much of the DVR functionality most subscribers want.

Getting to other TV platforms should be a big priority for vMVPDs, and Roku should be the top priority according to comScore. The company say 18% of WIFI homes have a Roku, 16% have an Amazon Fire TV device, 8% have a Chromecast, and just 6% have an Apple TV.

DirecTV Now clearly realized it made a mistake not supporting Roku, as it has just added support for the device. In addition, the service has added the ability to start watching a show from the beginning if a viewer joins the show in progress. In my testing, I found few shows that could be restarted in this way. And the restart functionality is hardly a replacement for full DVR capabilities.

Hulu Live, which only supports Apple TV from the top streaming media players, is planning to add Amazon Fire TV soon. However, the company would have been better off providing Roku support first.

comScore says two-thirds of the 3.1M vMVPDs subscribers have opted for Sling TV. However, the service streamers use the most is DirecTV Now, with 81 hours of viewing per month. Sling TV is second most used, with 69 hours per month, and PlayStation Vue close behind with 57 hours. However, DirecTV Now has an advantage over Sling TV. AT&T mobile and broadband customers can stream TV with DirecTV Now without it counting against their data cap.

vMVPDs were introduced over two years ago.

The services are making good progress in recruiting viewers, and subscribers use the services just like regular TV.

vMVPD providers are improving functionality, particular in the area of DVR, to be more competitive with traditional TV services.

This should help the sector continue to grow.