Over half of US Internet households now have a television connected to the Internet. The streaming media player is firmly in the driver’s seat of this growing trend, helping to fuel a virtuous cycle that will drive usage and penetration much deeper.

The game console’s power of incumbency made it the early, and seemingly unassailable, leader as the connected TV device of choice. However, it’s complexity, high cost and reliance on awkward game controllers have prevented it from breaking out of the game market, to become the nexus for television entertainment.

Instead, consumers increasingly flock to the simplicity and low cost of streaming media players (SMPs.) According to new data from Parks Associates, the number of U.S. broadband households with at least one of the devices increased from 27% at the beginning of 2015, to 36% in Q1 2016. With 30% of 2015 streaming media player sales, Roku devices, including the streaming stick and Roku 3, led the big four vendors in the SMP market. Amazon and Google are tied at 22% of sales each, Apple TV brings up the rear with 20%. The top four are squeezing out other players like the NVidia Shield and PlayStation TV. Last year all the players outside of the top 4 garnered 16% of sales. That has fallen to just 6% in 2015.

It is the SMPs that continue to lead the charge in functional innovation. For example, Amazon announced that it will deliver a substantial upgrade to the Fire TV and Fire TV Stick in the coming weeks. Principal among the improvements is integration of Alexa, Amazon’s voice assistant.

Users of the Fire TV devices will be able to launch SVOD services like Hulu and HBO with a voice command. For Amazon Prime Video users, they will be able to start watching specific shows with commands like “Watch Man in the High Castle.” This deeper voice integration will also work with services that customers have subscribed to through Amazon’s Streaming Partners Program, including Showtime and Tribeca Films.

Some other Alexa features, which have heretofore only been available through Amazon’s Echo, will also work through the Fire TV devices. Users will be able to search for restaurants and movies in local theaters. It is not clear, however, how popular using the television and streaming media player will be to execute these types of searches. Consumers have, in the past, rejected this type of interactive television functionality in favor of smartphones and PCs.

Fire TV users also will find an expanded number of 4K video sources available to them. YouTube 4K videos can now be watched in addition to ultra HD content from Amazon Prime and Netflix. 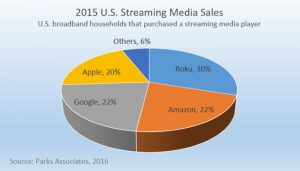 Widely available cheap streaming media players and deep penetration of SVOD services are creating a virtuous cycle for the connected television. Over the last year several sources have reported on dramatic increases in connected television usage. The BBC in the UK reports that online video requests to iPlayer from connected TVs (excluding game consoles) increased 4 times between March 2015 and March 2016, from 3.2% to 12.5%. Over the same period game console share of requests actually fell, from 3.3% to 2.7%. Freewheel reports that connected TV devices accounted for 22% of online video ad views in Q4 2015, up 76% year-over-year.

Underpinning the expansion in connected TV usage, and SMP sales, is the growing acceptance among consumers that SVOD services are part of their regular television diet. And where else to watch it than on the TV set. Little wonder that digital TV research is forecasting the number of TV sets connected to the Internet worldwide will double by 2020, to reach 880 million. And that forecast may even be conservative.

There is a virtuous cycle in place driving connected TV growth.

Vendors are investing in streaming media players, improving functionality while keeping them simple and affordable.

Consumers have accepted SVOD as “just television” and want to consume it on TV.