What are video providers focusing their technical teams on, and are they the right things? A new report suggests latency and devices loom large, though the approaches taken don’t always match customer needs!

The new Bitmovin Video Developer Report 2019 provides a fascinating snapshot of where video service providers are focusing their development attention. The report includes information on what industry issues are top-of-mind for 504 of Bitmovin’s customers and prospects. While the survey group doesn’t give an unbiased industry-wide picture, it certainly gives us a directional feel for state of online video delivery. Here are some of the top points from the report.

Latency is a big deal

Of the 504 industry insiders across 108 countries that Bitmovin talked to, 54% identify latency as one of the biggest challenges facing the industry. Reaching all the devices customers use is the second most selected challenge, with 41%. All other issues are far behind. For example, the third most challenge chosen is DRM, with 27%. 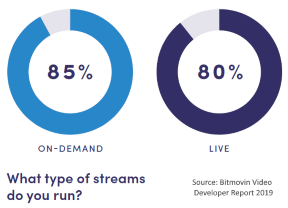 What is driving the significant interest in latency? 80% of the people Bitmovin talked to say their video service delivers live streams and 85% say they provide on-demand video. Latency is particularly apparent with live streams because streaming viewers are often far behind those watching on broadcast or pay-tv. Streaming viewers are not happy about seeing a tweet about a goal in the World Cup Final before they have seen it.

83% of survey respondents expect live stream latency to be less than five seconds. To get there, they will need a low latency streaming solution. Almost half plan to deploy such a solution within the next two years.

Video providers aren’t necessarily prioritizing the most popular devices. For example, Bitmovin respondents place Apple TV and Chromecast in the top three devices supported in all four regions covered in the report. Android TV is also in the top three in Latin America (LATAM), Asia-Pacific (APAC), and Europe-Middle East-Africa (EMEA.) In North America (NORAM,) Roku is the most supported device.

However, far more people in the UK and Germany use Fire TV than any other device. In the UK, 39% of online video streamers use Fire TV, versus 18% for Apple TV and 17% for Chromecast. In Germany, 61% use Fire TV, 17% Apple TV, and 14% Chromecast. However, 19% of survey participants say they support it.

In the U.S., the top streaming media players are Roku and Fire TV. Roku and Amazon Prime Video SMPs own almost 70% of the market. Roku is ahead with 39% to Fire TVs 30%. However, Fire TV devices are growing faster. Roku’s share increased 2% while Fire TV grew 6%. Apple TV and Google Chromecast are a long way back in third and fourth places respectively, with well under half the penetration of Roku. In the Bitmovin survey, 30% support Fire TV, placing it in joint third place with Android TV. 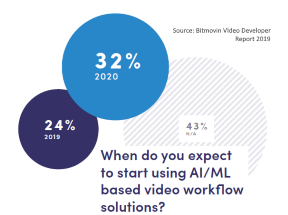 There have been many trials and demonstrations of AI/ML in video streaming applications. However, there are still relatively few implementations that are in production environments today. That could be about to change. A quarter of the Bitmovin survey respondents say they expect to start using AI/ML-based video workflow solutions this year. Another third say they will do this in 2020.

How will the AI/ML be employed? That is a subject I will be discussing at IBC with a panel of experts on Saturday at 11 AM at the Connect Everywhere Hub in Hall 14. However, prime areas where the technology can help include personalization, customer lifetime management, and metadata enhancement.

The Bitmovin report makes for interesting reading and delves into many other areas, including cloud encoding, codec adoption, and monetization models.

Latency and device support are the top two challenges on the list for video provider engineering teams.

Latency has become an issue because live streaming is much more prevalent online.

The top streaming media players supported by video providers are Apple TV and Chromecast, with Fire TV fourth or fifth on the list.

However, consumers far prefer Fire TV in Europe and the U.S. over Apple TV and Chromecast.