With 3-in-5 consumers expecting to be able to download video from their streaming service, shouldn’t every service provide the feature? A new free report shows that most services have yet to deliver and that implementations vary widely!

When Disney and Apple launched their SVOD services last month, both trumpeted the fact that subscribers could download all the included content to their devices. According to the new free report TV in Your Pocket: Mobile Video Downloading Report from nScreenMedia and VideoNuze, they had good reason to include the feature.

59% of users in the U.S. now expect streaming services to include a download feature. What’s more, those that have it use it. 65% of U.S. and 78% of UK SVOD customers say they are weekly or monthly users of video downloads.

The popularity of downloading is simply a reflection of the new reality for video service providers. Viewers today expect to be able to watch their favorite TV shows and movies when, where, and how they want. However, the reality is that a robust and reliable network connection is often unavailable. Allowing customers to download videos ensures service is always available to customers, no matter what the network connection status.

Most services do not support downloads 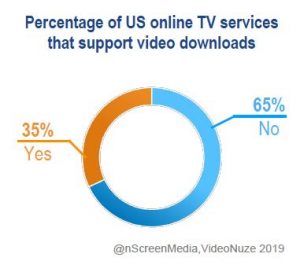 Given how valuable the ability to download is to both viewers and service providers, you would think every Internet TV service would already have the feature. As we discovered, when analyzing 80 of the top video services in the U.S., nothing could be further from the truth. Shockingly, only about a third of services tested support the downloading of video. 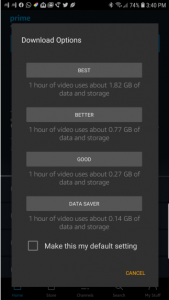 What’s more, when we tested the download features of each service, we found a considerable difference between them. Take being able to set the video quality of the download, for example. Such an essential feature helps the user in two ways:

Unfortunately, only a third of the services allowing video downloads support the feature. What’s more, implementations varied from basic to sophisticated. For example, Amazon Prime Video provides four quality levels and clearly informs the user of how much space each uses. Hulu, on the other hand, allows a user to select between only two levels: “Standard” and “High” quality. As well, there is no hint as to how much storage space is saved in the process.

A resource to understand the state of downloading in the industry

In all, we subjected service download implementations to a battery of nine tests, including Wi-Fi only downloads, auto-restart after failure, and download prioritization. As with download quality, we found many variations between implementations. To understand the state of download support and functionality, you should download the new free report TV in Your Pocket: Mobile Video Downloading Report now.

Most consumers expect their streaming services to allow them to download videos to their devices.

Many services do not support the feature, and implementations vary widely.

Without downloads, providers will not be able to meet their customer’s expectations of anywhere, anytime delivery.