As the mix of devices connected to the Internet skews toward IoT, bandwidth growth continues to be drive by devices with screens. Cisco sees UHD as highly influential but cord-cutting is having an impact in North America as well.

Cisco forecasts continued strong growth in worldwide IP traffic between 2017 and 2022. The company says the compound average growth rate (CAGR) of 26% per year will lead to monthly bandwidth consumption growing over 3-times, from 122 Exabytes per month to almost 400 Exabytes.~ 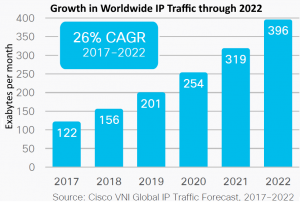 The regions experiencing the highest growth rates are the Middle East and Africa, 41%, and Asia, 32%. However, it is Asia that will be driving the highest usage in 2022, 173 Exabytes a month, followed by North America, 108 Exabytes.

However, Asia growth in bandwidth usage stems from a huge increase in the number of people able to access the Internet. Users grow from 1.7 billion in 2017 to 2.6 billion in 2022. North America’s growth comes mostly from individual growth in usage, and the number of Internet users only increases by 22 million over the period, to 353 million users.

The smartphone’s massive growth over the television might seem counterintuitive at first. However, nScreenMedia reported earlier this year that the growth in the use of connected televisions for premium video viewing was confined to a few markets (including the US, UK, and Norway.) In other markets, like Asia, the smartphone continues to dominate.

Despite the massive increase in devices, M2M traffic increases its share of bandwidth from 3% to 6% over the period.

Video remains the most important application on the Internet. The migration of consumer video services from bespoke networks, like cable and satellite, will remain a defining trend, at least through 2022. Cisco forecasts that Internet video bandwidth will grow from 55% of IP traffic in with 2017 to 71% in 2022. Gaming traffic also increases share, from 1% to 4%. All other applications lose bandwidth share.

A big part of the reason Gaming and Internet video grow so fast through 2022 is the steady rollout of Ultra HD 4K capable televisions. The company says worldwide 4K connected TVs will increase almost 5-times from 2017 to 2022, to 800 million. Consumers will increasingly opt to use 4K video streams as they watch and play through their UHD TVs.

In the North American market, Cisco notes that cord cutting has a significant impact on bandwidth usage in the home. The company says that monthly usage in a cord-cutting home in 2017 was 141 Gbytes versus 82 GBytes for the average home. As cord-cutting accelerates in the U.S., the effect could become a dominant factor driving bandwidth consumption.

Video’s domination of Internet video bandwidth is having another effect. Primetime viewing is increasing the difference between average usage and busiest hour usage. Cisco forecast peak bandwidth will increase to just over 6 Petabytes versus an average usage of 1 petabyte per second. The ratio of peak to average will increase from just over 3 to 6.

Video continues to drive the growth in global IP traffic.

Though there will be more IoT devices connected to the Internet than any other by 2022, bandwidth growth will be driven by devices with screens.

Key driving factors in the acceleration of growth of video bandwidth are: