Viacom announced it completed its acquisition of free ad-supported linear service Pluto TV on Monday. Viacom paid $340 million in cash for the company. Over the last six years, Pluto TV has expanded its audience to around 12 million active users.

According to Bob Bakish, Viacom President and CEO, the Pluto purchase is all about reach and advertising:

“The completion of this deal marks an exciting next step in Viacom’s evolution and a powerful opportunity for us to extend our consumer reach and broaden our ability to add value across the industry as the media landscape continues to segment. Together with Pluto TV, we look forward to becoming a stronger partner to distributors, advertisers, content providers and audiences around the world.”

Viacom is not the only TV company interested in the opportunity for free ad-supported linear online TV. Xumo TV, a service with a similar approach to Pluto TV, has attracted the interest of companies such as Sinclair Broadcasting. 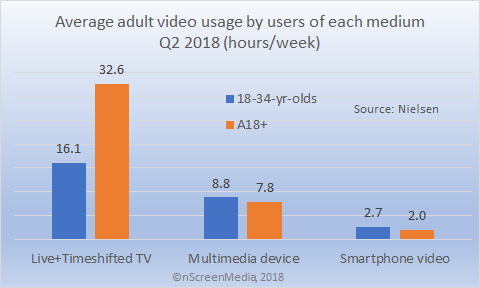 Traditional TV providers have watched as viewers, particularly younger viewers, have moved much of their viewing online. For example, in Q2 2018, the average 18-34-year-old watched over an hour per day on a TV connected device and two hours a day of traditional TV. Roku claims that its active users are now streaming nearly three hours per day. Roku CEO Anthony Wood thinks connected TV is the best way to reach young viewers:

“10% of 18-to-34-year-olds watch their television on Roku. So, if you’re an advertiser and you want to target a video at them, Roku is the place to go to reach them.”

FAST platforms such as Pluto TV, Xumo, and Wurl allow broadcasters to reach these younger audiences. They also will enable them to do something they cannot do in their traditional broadcast channels: addressable advertising. Rather than placing an ad in a specific channel, FAST platforms allow an advertiser to reach a viewer whatever channel they may be watching.

Like many TV executives, Mr. Bakish has been frustrated at not being able to deliver addressable ads in his linear TV channels. Pluto TV gives him that ability. There’s also reason to believe that the audience for FAST services could be ready for a significant expansion.

Viacom and Sinclair have good reason to be interested in FAST platforms. They have begun to replace the traditional broadcast infrastructure at the television set. In newer smart TVs from Samsung, LG, Vizio, and others a customer no longer needs to connect an antenna, pay TV system, or load a vMVPD app to watch linear TV. Just connect the television to the home Wi-Fi and start watching hundreds of streaming free ad-supported channels. Later model LG TVs include built-in access to Xumo, and Pluto TV is available on Samsung smart TVs.

Moreover, with no sign-up or subscription required, there is no barrier to get in the way of a new TV owner giving Pluto TV and Xumo a try.

FAST platforms give them:

The FAST platforms are poised for significant growth as smart TVs build them into the experience.