Viacom builds and buys to recapture the 18-34s

People aged 18 to 34-years-old are rapidly disengaging from traditional TV as they replace the viewing with digital. In the UK and US, TV programmer Viacom is adjusting its strategy to track and recapture them. 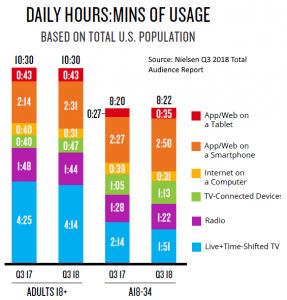 favor of a digital lifestyle. In the US, the average adult watches 4 hours and 14 minutes of live and time-shifted television each week. The young watch just 1 hour and 51 minutes. What’s more, their viewing is falling fast, down 20% between Q3 2017 and Q3 2018.

The same trends are in place in the UK. The average adult watches for 3 hours and 24 minutes of live and time-shifted TV per day, while 16 to 34-year-olds watch for 2 hours. As well, the young watch a third less TV than they used to in 2010.

Viacom moves to recapture its audience

Viacom is acutely aware of the trend away from television by the young. Though ratings for MTV top shows have recovered somewhat in recent months, the overall trend is down. For example, the VMA’s drew an audience of 12.4 million viewers in 2011, with a rating of 10.8 in the 12-34-year-olds. In 2019, the VMA’s attracted just 5.2 million, with a rating of 1.04 in the 18-49s. Tellingly, the award show set a record for online delivery, providing 142 million live streams.

In the last year, the company has moved to address its flagging fortunes by moving online in earnest. It purchased free-to-web linear streamer Pluto TV for $340 million in January of 2019. Pluto TV has 12 million active users, and its channels are built into top-selling Samsung smart TVs.

“We’re here with the solutions that are going to help you reach the most valuable younger consumers in a way no one else can that’s going to drive your business.”

Viacom has not stood still in the UK. It has just launched MTV Play, a direct-to-consumer streaming service. Dan Fehy, VP of Commercial and Content Distribution at Viacom, says MTV Play is specifically targeted to recapture the young:

“There’s a younger segment of MTV’s audience that’s heavily mobile using, who are disengaging from broadcast VOD, and we felt if we didn’t get MTV into that segment, we might lose that audience.”

The mobile-first MTV Play has the full MTV content set including catch-up, full series, and library titles. Viacom has gone to great pains to ensure that MTV Play does not encourage existing TV viewers to dump their existing pay TV subscriptions. Firstly, the DTC service is mobile only. To watch on the big screen viewers will need either Sky’s NowTV service or a full subscription to pay TV. Secondly, it costs £3.99 a month ($5.) Mr. Fehy believes the price right to acquire cord-cutters but too high to cause cord-cutting.

18 to 34s a desirable digital demographic

Viacom isn’t the only content provider angling for the young audience. Other free ad-supported television (FAST) providers are aiming at them as well. Roku is chasing them with the advertising-supported The Roku Channel. It is also crafting advertising products in co-operation with advertisers to help it reach them. Xumo and IMDb Freedive (Amazon) and niche providers like VRV are courting them too.

That said, with its strong television legacy and developing digital portfolio, Viacom should be a strong contender to win a sizable share of the online 18-34 viewers.

Young people are disengaging from television and spending increasing amount of their time watching online.

Traditional TV broadcasters focused on the young are starting to adjust their strategy to recapture young viewers online.

Viacom is buying companies and building products in the US and UK to help it compete for the young online viewer.