According to the Digital Home Entertainment Group digital home entertainment spending exceeded physical for the first time ever in the second quarter. The speed that this happened is simply remarkable: 2 years ago just one third of spending was digital.

DEG reports that total physical media home entertainment spending was $2B in the second quarter of 2015, down 12% on the same quarter last year. Total digital spending was up 19%, to 2.1B. In Q2 2013, 62% of spending went to disk sales, rentals and subscription services. In the quarter just ended that has fallen to 48%. Electronic sell through, video on-demand rentals and subscription VOD increased from a 38% share in Q2 2013 to 52% last quarter.

The data also reveals a dramatic shift in spending behavior. Physical media revenue has historically been highly seasonal. For example, physical revenue was 72% higher in Q4 2012 than in Q2 2013, driven by consumers purchasing disks to give as gifts in the holiday season. Total digital revenue shows hardly any seasonality at all. Electronic sell through (EST) is higher in the fourth quarter (it was 23% higher in Q4 2014 than Q2 2015.) However, SVOD revenue exhibits almost no seasonal variation and it dwarfs EST, $1.2B to $431M in Q2. 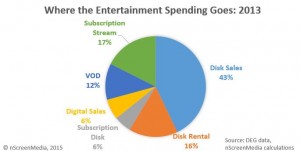 Another area that SVOD seems to have eclipsed is rental*. SVOD spending first eclipsed rental in the third quarter 2014, but rental staged a mini-recovery in Q4 2014 and Q1 2015. That recovery seems to be over. Store rentals fell a further 10%, to $154M, in Q2 while Kiosk rental eked out a 0.6% gain, to 437M. It’s sobering to think that consumers will likely spend one third of the money on store rentals this year than they spent just 4 years ago. 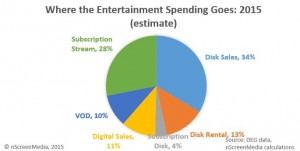 The good news in all of this for the industry is that the amount US consumers are spending on home entertainment has remained relatively stable for the last 4 years, at around $18B. How consumers spend that money has changed dramatically in the last two years. In 2013, 43% went to buying disks, 17% to SVOD services and 16% to disk rentals. By the end of 2015, nScreenMedia estimates that disk spending will still occupy the top slot, though with a much diminished 34% share. SVOD spending will have grown to 28% and disk rentals fallen to 13%.

The switch from physical to digital home media consumption is writ large in Q 2015 DEG numbers.

SVOD spending exceeded rental spending again in Q2. This is likely to remain the case for the foreseeable future.