New comScore data shows that connected TVs have become a mainstay of American homes. Viewers are learning to rely on the built-in streaming portals of TVs rather than using a box or stick. As well, they are almost as likely to be watching ad-supported content as ad-free.

Comscore’s 2020 State of OTT report shows that 69.8 million U.S. homes stream video to a CTV, an increase of 5.2 million year-over-year (YoY.) Since the U.S. Census Bureau says there are 125 million occupied homes in the U.S., CTVs are now used in 56% of households.

Home penetration is not all that is growing for CTV. Viewers are watching for longer and more frequently. The average home streamed 102 hours of content a month (up 17 hours YoY) to the TV spread over 18.7 days (up 1.3 days YoY.) In other words, on viewing days, the average CTV household streamed 5 hours and 27 minutes of content.

The CTV devices we own 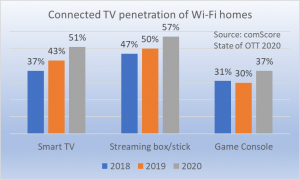 More homes us a streaming box and stick than any other CTV device. 57% of Wi-Fi homes have them, up 7% from 2019. However, smart TVs continue to catch up. The number of households with one increased by 8% to reach 51%. Game consoles also increased penetration a surprising 7%, to reach 37% of Wi-Fi homes. In the previous two years, home penetration remained essentially flat, at 30%.

The CTV devices we use

ComScore data suggests that the increase in the number of homes with a game console has nothing to do with streaming video to a television. 6% fewer homes used game consoles for streaming this year versus last. Less than half of households with an Xbox or PlayStation use it to stream video. The LA Times says that spending on video games in the U.S. hit a record $10.8 billion in Q1, up 9% YoY.

The services we watch 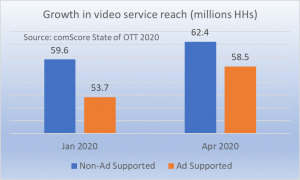 Comscore registered a massive increase in CTV viewing between January and April of this year. The number of CTV streaming homes leaped from 44 million on March 2nd to 50 million by April 6th. Moreover, unlike Nielsen and other data which suggests viewing is tailing off, comScore says the number has remained elevated through June 1st.

Advertising-supported services saw the most significant gains during the first quarter. The number of homes using services like Pluto TV on a CTV device, and the built-in free streaming apps in their TVs grew 9% to reach 58.5 million. Non-ad supported services saw a more modest 5% gain or 62.3 million households.

The big five streaming services – Netflix, Hulu, Amazon Video, YouTube, and Disney+ – consumed most of our attention. They accounted for 82.5% of CTV streaming hours in April 2020.

Most U.S. homes now have a connected TV.

They are almost as likely to be using a smart TV as a streaming box or stick.

AVOD services are almost as popular as SVOD.