It’s easy to forget that there is great diversity in TV viewing around the US. For example, residents of Charlotte love TV and continue to watch live even as they adopt streaming. San Franciscans, on the other hand, just aren’t that into TV from any source.

Television consumption varies greatly among the major urban centers in the US. For example, citizens of Charlotte North Carolina watch 4 hours and 8 minutes of live television daily, while San Franciscans watch just 2 hours and 26 minutes. There is one thing each of the seven cities discussed agree on: they all decreased live consumption between November 2015 and November 2017.

Viewers are not switching their live TV viewing for time-shifted consumption through DVRs and pay TV VOD systems. Except for Charlotte, citizens of each of the six other cities watched less time-shifted TV over the same period.

On average, the citizens of the seven cities watched 28 minutes less of live and time-shifted TV between November 2015 and 2017. The average increase in TV streaming minutes over the same period was 14 minutes. It is likely the missing 14 minutes, and perhaps more, transferred to mobile devices.

A closer look at TV streamers

The numbers discussed so far average viewership across all 25-54-year-olds in each city, whether they stream to the TV or not. To get a better idea of the behaviors of individuals, Nielsen also provides data on just those that stream to the TV. 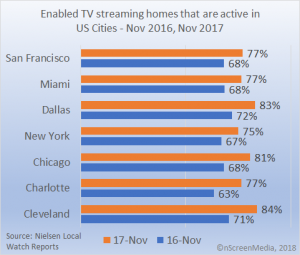 Of those urban homes that are TV-streaming enabled, average active monthly TV streamers were 78.6% in November 2017, up 7% from one year earlier. Cleveland and Dallas had the highest usage rates with 84% and 83% respectively. The lowest usage rate was seen in New York (75%.)

However, in only one market – Charlotte NC – did TV streamers watch less monthly minutes than the previous year.

Urban consumption of live television is still relatively high, though falling in all major cities.

DVR and VOD time-shifted viewing is also falling in almost all markets.

TV streaming is growing strongly, though it is not compensating for the decline in regular television.