New data shows that U.S. TV viewers are as likely to cite online as their primary TV source as traditional pay-tv. 1-in-5 say Netflix is their primary, but the SVOD pioneer could be headed for trouble later this year.

New survey data from Hub Entertainment Research shows how far online video services have come over the last decade. For the first time, about the same number of people identify the pay-tv set-top box (47%) as their default TV source as say it is an online platform (45%.) It is also interesting to note the trajectory of each TV source. The number saying the pay-tv STB is their default fell 7% from last year while the online-first group increased 7%.

The trend toward online viewing as the default is by no means confined to the US. In a first-quarter 2019 European survey, nScreenMedia found that nearly a third of Swedes said their primary source of TV was online versus 45% for traditional pay TV. In the UK, 20% said online TV was prime versus 61% for pay-tv. A quarter of Germans said online TV was primary, over 53% for free-to-air. In all three countries, online TV was the second most popular TV option. 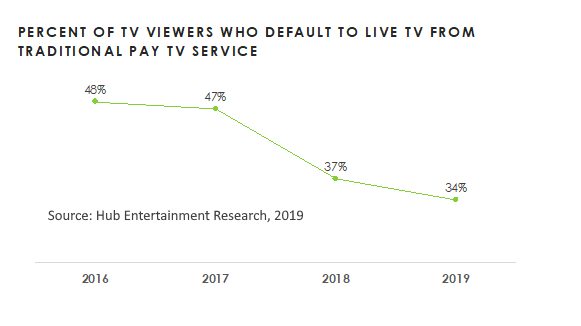 Live television viewing has been in decline in the U.S. for some time. Nielsen reports that the average adult viewer in the US watched just over 28 hours of live TV per week in Q1 2019, down 20% from 2014. The DVR and, now, SVOD services have eroded the need for live viewing. The Hub seems to confirm the trend. It says that 34% say they default to live TV from a cable, satellite, or telco TV provider, down 3% from last year and 14% since 2016.

However, vMVPDs like Sling TV and YouTube TV are mitigating the decline in live viewing. In 2019, 5% say that live TV from a vMVPD is their default TV source. In other words, 39% default to live TV viewing. In 2018, virtually the same number (40%) said they defaulted to live from an MVPD (37%) or vMVPD (3%.)

The Hub research has good news for Netflix because 21% say that the SVOD giant is their default source for watching TV. 34% nominated live TV from an MVPD and 11% said cited their MVPD DVR.

The not-so-good news for Netflix is that the number of people saying it is their default fell for the first time. It was down 2% from last year. The data comes from the Hub’s June 2019 survey and could explain why Netflix U.S. paid subscribers fell by 126,000 in the second quarter.

It gets worse for Netflix. Hub says that the average consumer uses four TV sources and that many people won’t add another without dropping one first. Disney+ and HBO Max will arrive in the fourth quarter, and many consumers will be forced to choose which service to drop to pick up one or both. 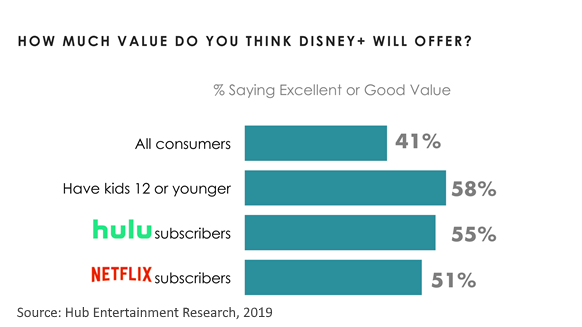 Disney+ looks especially troubling for Netflix. On average, 41% think that at $6.99 a month and with the announced slate of programming, the soon to be launched service represents good or excellent value. 51% of Netflix users say the same.

In the U.S., the same number of people say online is their primary TV source as pay-tv.

Netflix could lose subscribers in the U.S. between Q4 2019 and Q1 2019 as people sign up for Disney+ and some drop Netflix to save money.