Evolving beyond 140 characters is proving a major challenge for Twitter. But live video, and specifically live current affairs streaming, is emerging as key differentiator for the social platform.

In a first for the BBC, the corporation is partnering with Twitter to deliver a series of election specials. Theresa May is seeking a strong mandate for her approach to negotiating Britain’s exit from the EU. Twitter will be live streaming 5 BBC election specials, including two debates and an election night special.

Election streaming is nothing new for Twitter. It live streamed all the debates between Hilary Clinton and Donald Trump in the 2016 election. Unlike TV, where the ratings declined over time, the Twitter audience grew. For example, the first debate attracted 2.5 million unique viewers, while the second debate reached 3.2 million.

Engagement from the audience was also very high. The second debate generated 17 million tweets which, in turn, yielded 3 billion impressions. Most importantly, 70% of the second debate’s audience was under the age of 35. And this could be why the BBC broke with tradition and partnered with Twitter for the election in the UK.

As in the US, where live TV viewing sank 8% in the 25-34-year-olds in 2015, younger people in the UK are also shifting their viewing online. The 25-34-year-old UK viewers watched 7% less television in 2015. UK youth has also adopted the smartphone as their device choice. 90+% of 18-24-year-olds have one versus 66% of the general population. Almost half of young people now regularly watch on-demand and catch-up TV on their smartphone. The BBC is all-too familiar with these trends: 45% of BBC iPlayer users are 16-34-year-olds, while only 30% of TV viewers are in this age range.

It is a very big deal for the BBC to break with tradition and simulcast current affairs programming with a third party like Twitter. All the election coverage will be carried live through the BBC’s own streaming platform, iPlayer. However, though iPlayer served 277M requests in February 2017, just 16% of those were for simulcast (live) streams. So, the deal with Twitter is a tacit admission that iPlayer simply isn’t doing a good job reaching young people with its live coverage. 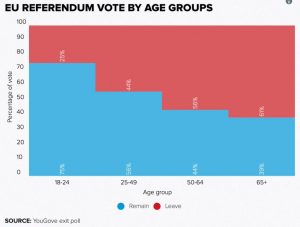 Young people are particularly important to keep engaged with the political process because many may feel disenfranchised by the Brexit vote. Young people overwhelming voted to stay in the EU. 75% of 18-24-year-olds and 56% of 25-49-year-olds voted to remain in the EU. However, older UK citizens overwhelmed them. More 50+ voters turned out for the Brexit vote, and voted just as strongly to leave as younger voters did to stay.

Given Twitters excellent record of accomplishment during the US general election, it makes a lot of sense for the BBC to work with it on the UK election. It also shows that Twitters combination of live streaming and live tweeting is a potent force with the young in helping foster their participation.

The BBC has turned to Twitter to help it reach young voters in the upcoming UK election.

Twitter was very successful in engaging the youth audience in the US election in 2016.