Nielsen’s Q1 2015 Total Audience Report was the usual tale of woe for traditional television, with declines in viewing across almost all age groups. However, for streaming media player makers the report had great news: huge increases in usage for young and old alike.

As in Q4 2014, traditional TV viewing took a beating in Q1. Every age group watched less traditional television in the first quarter compared to Q1 2014. The biggest declines are once again seen in the 18-24 year olds (the young millennials) where time watching fell over 16%, to 93 hours and 19 minutes a month. Teenagers also watched 14% less and the 25-34 year olds watched 9% less. The average decline across all age groups was almost 5%, falling nearly 8 hours to 151 hours 33 minutes a month.

Timeshifted viewing* (through a DVR, VOD or start-over service) also fell in the younger age groups. Again, young millennials led the decline, with an 8% drop over Q1 2014. Teenagers watched DVR content 6% less and 25-34 year olds 4% less. The over-65s, on the other hand, seem to have discovered the DVR in earnest and used it 16% more, though it only represented 7.6% of their total TV viewing.

No surprise where at least some of the viewing from traditional TV is going. Many age groups saw increases in watching video on Internet. For example, young children (2-11 year olds) increased online watching almost 50% over Q1 2014, and are now watching nearly 8 hours a month. The 65 and older set increased Internet video consumption 65% to 6 hours and 41 minutes a month. Oddly, the only age group that did not increase Internet video watching was the young millennials, remaining unchanged at about 19 hours a month.

Video watching through streaming media players (which Nielsen calls multimedia devices^) has seen massive growth over the last year. Nielsen says that, on average, usage of these devices has grown nearly 200% over the last year, to 4 hours and 42 minutes a month. The biggest increases in usage once again occurred in the young millennials, increasing 240% year-over-year to 7 hours a month. However, the biggest users of multimedia devices are the 25-34 year olds, watching 8 hours and 13 minutes a month (an increase of 238% over last year.) 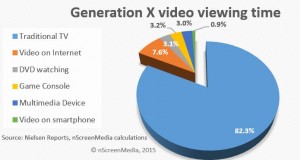 The video mix has shifted once again this quarter toward new media sources. Generation X viewers spend 3.9% less time with television, though it still occupies 82.3% of viewing time. Watching video on the Internet consumes 7.6% of time, an increase of 1.3% year-over-year. DVD, Game console and multimedia devices each claim roughly the same amount of viewing time, around 3%. Watching video on a smartphone accounts for just under 1% of time.

Television consumption continues to decline across all age groups.

Young millennials in particular seem to be turning away from traditional television the fastest.

TV connected devices, like Roku and Chromecast, saw extraordinary growth in usage over the last year.