Pay television’s rollout of TV Everywhere services was a strong defensive move by the industry against the advance of online video services. New data from the UK suggests it may have done the reverse!

Netflix launched streaming services in 2007. When the Xbox client was released just before the holidays in 2007, Netflix picked up 1 million subscribers within a matter of weeks. Netflix successful streaming launch certainly got the attention of pay TV executives like Brian Roberts, CEO of Comcast. He realized there was a strong interest in connected device viewing. He also realized pay TV needed to have a response.

TV Everywhere as a concept was launched by Brian Roberts and Time Warner Inc head Jeff Bewkes in June of 2009. The idea was very simple: a pay TV customer should have access to all their subscribed content where ever they may be. A grand concept which, if done right, should have really blunted the appeal of services like Netflix and Hulu.

Unfortunately, things moved very slowly with the rollout of TVE for the next four years. By Q3 2013, less than 20% of pay TV subscribers were regular users, and only one third realized this was even option. Netflix, on the other hand, had already gained 31 million streaming subscribers. 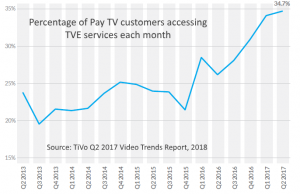 Pay TV responded with a massive advertising campaign to get their customers using TVE. Operators also made it easier for customers to sign-in and use the service from their connected devices.  The campaign was a big success. By Q2 of 2017, over 50% of pay TV subscribers knew they could access their TV service on connected devices. 35% had become regular users.

The massive adoption of TVE has done nothing to slow the takeup of SVOD services. Netflix now has 55 million U.S. subscribers, and other providers like Hulu and Amazon are growing strongly too. Unfortunately for pay TV, new data from the UK suggests that TVE may have actually helped the adoption of SVOD services, not hindered them.

Media research group Kagan surveyed 1000 adult Internet users in the UK about their use of SVOD services like Netflix. The company found that 73% of pay TV TVE users are also frequent SVOD users. Conversely, just 29% of pay TV subscribers that are not TVE users access SVOD services.

According to Kagan, there are other strong correlations between online video viewing and SVOD usage. For example, among those that rent or buy videos online at least once per week, 86% are frequent SVOD users. As well, 59% of free-to-air TV viewers that use TV catchup online services like iPlayer are also frequent SVOD users.

As a defensive strategy, TVE is a failure

It is perhaps no surprise that the Kagan data shows that frequent online TV and movie viewers are more likely to also subscribe to SVOD services. Whether it is an operator portal, iTunes movie rentals, catch-up TV, or Netflix that gets someone watching online, they are more likely to find and try other services once there. TV Everywhere, then, is part of the irresistible pull toward online viewing.

TV Everywhere was launched as a defensive strategy against online video.

TVE may be failing to stop cord-cutting too.