New data from DEG shows that digital transactional spending took an alarming dip in the second quarter of 2019. Also, the interest in renting movies and shows, either on digital or disc, slumped, with revenue plummeting 24%.

Disc rentals and purchases continue their rapid decline, falling from $1.36 billion in Q2 2018 to $1.01 billion in Q2 2019. Disc sales fell 19.3% from Q2 2018 to $716 million. The decline in rental spending increased dramatically from 14% to 24%, with total revenue decreasing to $353 million. By way of contrast, in the second quarter of 2013, disc sales were double what they are today, and rental revenue was almost three-times larger.

The decline in spending on buying and renting movies and shows both accelerated in the second quarter. The amount spent buying disc and digital copies fell 12.1% over Q2 2018, to $1.3 billion. Rentals from stores, kiosks, and online stores fell 16.9% (a big acceleration from an annual decline of 2.4% in Q2 2018,) to $0.8 billion.

Subscription VOD and disc service spending increased 22%, to $4 billion in the quarter. There are two things note with the growth of subscription service spending. Though growth remains robust, it is slowing. The last four quarters have seen annual growth considerably below the previous year. Secondly, subscription disc revenue is tiny compared to SVOD: $77 million versus $3.97 billion respectively.

Where the spending goes 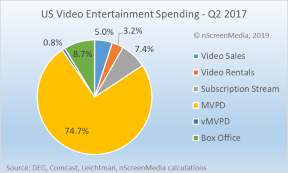 go to an MVPD or vMVPD, down a penny from Q1 2017. Cable, satellite, and telco TV lost 3.4 cents, while services like Sling TV and YouTube TV gained 2.4 cents. SVOD continues to grow strongly, capturing 12.1 cents of every home entertainment dollar, up 4.7 cents. The box office lost wallet-share, down 1.8 cents to 6.9. Video sales and rentals 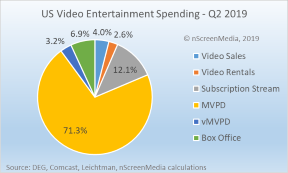 also shrank, down one cent and 0.6 cents respectively.

Two major factors continue to drive change in the way US consumers spend their entertainment dollar:

The rental business – physical and digital – suffered its worst quarter in years.