The first quarter was only the beginning of the bad news for cable, satellite, and telcoTV operators. With a recession, little new TV content, and a continued shortage of live sports, subscriber losses will remain high for the rest of the year. 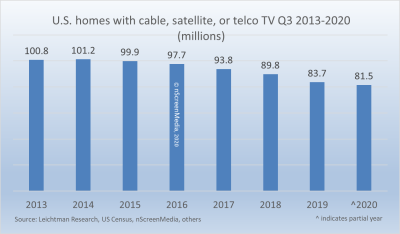 As of the end of the first quarter, 2020, cable, satellite, and telcoTV (CST) operators had 81.5 million homes subscribed. Operators lost 2.2 million subscribers in the first quarter, and over 7 million than in Q1 2019. Simply put, the industry has never seen such a rapid decline in its history.

The market share of the declining traditional pay TV market continues to shift toward cable. In Q1 2017, there were 96.9 million CST pay TV homes. Cable owned 53% of them, satellite 36%, and telco TV 11%. Three years later, the industry has lost 14.5 million subscribers. Cable has boosted its share to 58%, telcoTV has stayed the same (11%), and satellite’s has fallen to 31%.

The number of homes in the U.S. without a CST pay TV subscription increased by 2.9 million in the first quarter of 2020 to reach 43.5 million. The increase includes 2.2 million CST pay TV defectors and a 700,000 increase in the number of U.S. occupied homes. There are now just under 125 million occupied U.S. households.

Some of these homes still have pay TV services. Currently, there are just over 9 million subscribers to virtual MVPDs, like Sling TV and YouTube TV. However, according to TDG, 23% of vMVPD homes still have a traditional pay TV subscription. In other words, 84% of households without a CST pay TV subscription have no access to cable channels at all.

CST pay TV penetration of homes in the U.S. has declined dramatically over the last eight years. 2012 finished out the year with almost 9-in-10 households with a pay TV subscription. Today, penetration has fallen 23% to reach 65.2%. Penetration fell 2.1% in just the last quarter.

The number of homes with at least one SVOD subscription eclipsed MVPD penetration in 2019. According to survey data from Hub Entertainment Research, the number of people with at least one SVOD service now stands at 78%. Moreover, the number with two or more of the big three (Netflix, Hulu, and Amazon Prime Video) reached 46%. Leichtman Research said SVOD penetration was 74% in August of 2019.

Outlook for 2020 and beyond

A recession seems inevitable for 2020, with 40+ million people losing their job during the last three months. What is more, it will take several months for TV production to recover and live sports to restart. These factors will conspire to make 2020 the worst year on record for the CST pay TV industry. Expect subscriber losses to top 8 million for the year and penetration to fall below 60%.

With the CST pay TV industry now in full decline, penetration will fall considerably over the next five years. Expect the number of homes with cable, satellite, or telcoTV to fall below 50% as another 20 to 25 million subscribers transition to Internet TV services.

The number of homes without CST pay TV grew 2.9 million to reach 43.5 million.

Expect penetration to fall below 60% by the end of the year.