There is no getting around it. Traditional pay television services are in full decline. The top 7 public operators lost 2 million subscribers in 2017. The damage could be much worse in 2018.

The traditional pay television industry in the United States had its worst year ever in 2017. The top seven public companies, which jointly account 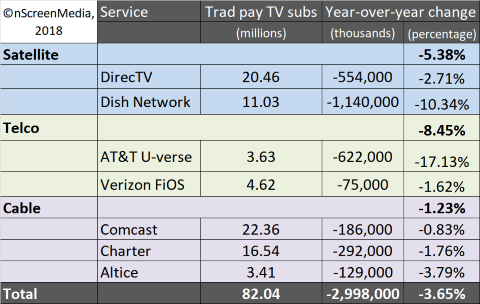 for 85% of pay TV subscribers, lost 3 million residential subscribers. If this 3.7% decline holds true for the operators serving the other 15% of subscribers, the industry will have lost 3.5 million subscribers.

Telco TV faired the worst in the year. AT&T U-verse lost 17% of its subscriber base. The huge loss is primarily attributable to the fact that AT&T is working hard to retire the service, pushing subscribers to switch to DirecTV and DirecTV Now. Verizon FiOS lost 1.6% of its pay TV customers.

Satellite operators lost 5.4% of its customers. Dish Network subscribers lost 10.3%, down an amazing 1.14 million. DirecTV lost 554,000 customers, or 2.7%, despite AT&T making a huge marketing push to bring U-verse customers to the services.

Cable held up the best in the face of this broad overall decline. Comcast, Charter, and Altice jointly lost 1.1% of their video customers. Comcast had the lowest overall decline, losing just 0.8% of subscribers. Charter was down 1.8% and Altice down 3.8%.

The X1 bubble has burst

Last year, Comcast enjoyed the first full year of growth in pay TV subscribers in 10 years. The company gained 103,000 subscribers. The company’s market-leading X1 service seemed to be doing a great job attracting disaffected subscribers from other pay TV services. Showcases such as the Rio Olympics, which Comcast integrated into a unique experience on X1, did a great job of marketing the service.

In 2017 far more customers left rival satellite and telcoTV providers than in 2016. Unfortunately for Comcast, most appear to have left traditional pay TV altogether rather than switching to its premium X1 experience. As my podcast partner Will Richmond remarked to me last week, it seems like Comcast has already won all the customers that would want its high-priced TV experience.

The biggest beneficiary of the massive decline in traditional pay TV is the new online virtual MVPDs. The existence of services like Sling TV and DirecTV Now is a major reason many people now feel they can live without their cable or satellite company. Before these companies existed, it was impossible to get content from channels like ESPN and TNT without pay television. Now, a $20 a month subscription to Sling TV provides both.

Dish Network reported that Sling TV gained 710,000 subscribers in 2017 to reach 2.21 million. DirecTV Now reached the 1 million subscriber mark in December, impressive performance by the barely 1-year-old service. Overall, vMVPDs have about 4.6 million subscribers or about 5% of total MVPD subscribers.

Compared to traditional pay TV, the vMVPD business is terrible. nScreenMedia estimates that even after YouTube TV’s $5 price increase the service is barely breaking even. The same is likely true at other providers, like DirecTV Now. However, none of the major vMVPDs show any sign of backing away from their aggressive pricing. Linear television services are part of more important strategic initiatives that make low or non-existent profit margins tolerable for companies like AT&T and Google.

With these market dynamics, we could see traditional pay TV services decline another 5% in 2018 possibly falling below 90 million homes.

vMVPD providers are making little or no profit on their services.

Breakeven pricing policies at vMVPDs will persist throughout 2018 and will cause the decline in traditional pay TV to accelerate in 2018.