What will be the top tech trends impacting the infrastructure of OTT video delivery in 2019? A panel of experts at the TV of Tomorrow Show in New York City think the Internet will deliver at a much higher quality than it ever has before.

I had the pleasure of moderating a discussion on the state of OTT video infrastructure at the TV of Tomorrow Show in New York City on December 6th. I asked the panelists what infrastructure technology would be important in 2019 and why it would be. Here’s what each had to say.

Sean Doherty, CEO of Wurl, thinks live ad-supported events are going to be a big theme in 2019:

“Live OTT that’s ad-supported. Events and music and sports and esports, mixes of prerecorded and live programming. Lots of streams of what tends to be tentpole events for video services.”

Cisco sees strong growth for live online. In the just-released Visual Networking Index, the company says the live component of Internet video will grow from 5% of bandwidth in 2017 to 17% in 2022. Long-form video’s share remains about the same over the period while SD video falls from 32% to 16%.

We should enjoy improved streaming experiences in 2019 according to Dan Taitz, COO of Penthera. He thinks the OTT infrastructure improvements in 2019 will aid in:

“Bringing all the user engagement and user experience improvements to the ad-supported OTT market. Server-side ad insertion is an example of that. Download and offline playback with ads is another example.”

Once a niche feature, the ability to download video is becoming increasingly common in SVOD services. In a recent nScreenMedia consumer survey, 42% of US and half of UK SVOD customers said 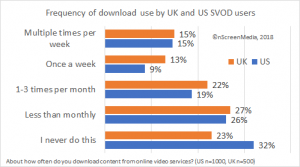 they are monthly users of video downloads. However, until now it has not been possible to download ad-supported content. That should change in 2019 as ad-supported services expand and leverage solutions from companies like Penthera to refresh ads in downloaded content.

All the 4K TVs and streaming devices consumers will buy this holiday season will contribute to a big boost in UHD streaming in 2019, according to Jesper Knuttson, VP of Sales, Qwilt. He thinks we will see:

“A lot more high-quality content like 4K served through OTT, even some VR. That’s going to put a lot of strain on the bandwidth required to do online streaming.”

Cisco agrees with Mr. Knuttson. The company forecast UHD’s share of worldwide video bandwidth will grow from 3% in 2017 to 22% in 2022. At the same time, overall worldwide bandwidth consumption will more than triple by 2022. Handling all the data will continue to stretch network technologies. The ability to cache and stream video in the network close to the streamers will be key to meeting the data demand. Products like Qwilt’s open caching solutions will be an essential part of the solution.

In 2019, the infrastructure of OTT video delivery will: