What happens when a DVR owner has infinite disk space and tuners? For purchasers of TiVo’s new 24TB 6 tuner Mega DVR the boundaries of space and time have effectively been removed. Get ready for personal content libraries to rival Netflix and Hulu.

The new TiVo Mega DVR has been created with the ultra-entertainment enthusiast in mind. The 24TB RAID 5 user swappable hard drive can store 26,000 hours (3 years) of SD video and 4,000 hours (6 months) of HD. While a user won’t be able to record every channel at once, with 6 tuners the device is likely to be able to record everything she might care about. It also includes remote streaming, both in and out of home, to smartphones and tablets.

Standard TiVo features are also built in, including: OTT streaming services like Netflix, universal search and recommendations. The company has made some enhancements to the interface to make organizing and searching the thousands of shows stored a little easier. Collections offers editorial grouping of current events and categories like Shark Week and The Olympics. A third column has been added to the My Shows screen. However, the company may well have some more work to do to make all of the content easy to organize and mine. For example, the ability to create custom filters or search on genre’s outside of the ones that come built in might be useful.

All of the features and functions of the TiVo Mega do not come cheap. Though final pricing hasn’t been announced the company says it will be in the region of $5000. This does, however, include lifetime service.

The TiVo Mega comes at an interesting time in the history of the DVR. The device has been a slow-burner, taking 16 years to reach half of American homes. In the process, it has changed the way users think about television. Freedom from appointment TV has led to an expansion of viewing as consumers no longer need to miss a clashing show. DVRs introduced users to binge viewing long before there was a Netflix streaming service. TiVo has even entered the vernacular as a verb meaning to record a TV show. 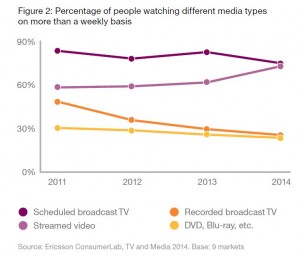 However, SVOD services are beginning to affect usage of the DVR. Access to large libraries of online content means users can discover shows they might never have thought to record. And this seems to be having a direct impact on DVR usage. In Ericsson’s latest TV and Media Report the company shows that the number of people watching recorded broadcast TV has declined from around 50% in 2011 to 30% today. During the same period streamed video usage has grown from 60% to 75%, virtual parity with broadcast TV usage.

However, linear TV still remains a primary source of entertainment for many, and the TiVo Mega allows a user to tap that resource in a way previously unavailable. With so much disk space, users can rapidly build their own massive library of content to rival Netflix. Why not record every new show in the fall schedule just in case one is an unexpected hit? Recording old favorites like Cheers, Seinfeld and Bonanza is easy as they are being broadcast on some channel virtually all the time. Over just a few months the library could grow to include all the episodes of hundreds, even thousands, of shows.

This behavior could have a massive impact on broadcast TV and the syndication model, which I discussed in a piece I wrote last year. For now, however, at $5000 TiVo Mega is unlikely to appear in enough homes to disrupt the current television model.

In the long run, this behavior could threaten the existing broadcast and syndication models.

For now, the impact will be limited by Mega’s high price.