Local TV still commands a substantial audience and a place of importance in many people’s video lives. However, Tegna’s VP of programming knows people are watching on connected devices, and he is determined to keep local TV in the picture.

As Bob Sullivan, SVP of Programming for Tegna, says in the interview below:

“When people in a local market want to know what’s going on broadcast news is still the number one place.”

That said, some disturbing trends have local TV providers worried. Those that frequently 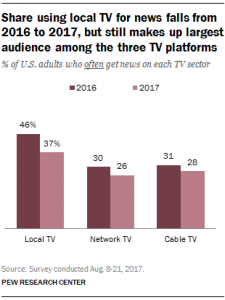 watch local news tend to be older. For example, 57% of those 65 and older watch local news, while just 18% of 18 to 29-year-olds watch. As well, overall viewership has fallen dramatically. The number of US adults watching local TV news fell 9% between 2016 and 2017.

Mr. Sullivan is aware of these trends and is moving to recapture the attention of those people migrating online:

“Our job isn’t just to push out a daily newscast on our broadcast linear stations, but also to go find that audience and provide quality content to them on all their platforms.”

The company created a magazine-style daily news show, in the style of Good Morning America, called Daily Blast Live. The show is broadcast live in 36 markets on Tegna stations and is streamed live on YouTube and Facebook.

Facebook and YouTube are very good places to deliver a show like Daily Blast Live. Facebook is a very important site for news as 68% say they get at least some updates there. As well, it is the second most popular site for video. According to comScore, YouTube attracted 165 million U.S. visitors from desktop computers in March 2018 and Facebook attracted 65 million. Given that both Facebook and YouTube both say most of their users are on mobile devices, their video audience is liable to be much larger than comScore suggests.

Tegna and other local broadcasters may have another advantage on the social platforms. YouTube has been hit with several scandals where premium brand advertising has been shown against unsavory content. Facebook has had to deal with problems with fake news being widely circulated on the platform. Local broadcast news could bring an injection of quality at just the right time.

Some local TV broadcasters are creating news shows with social and TV audiences in mind.

With problems of brand safety and fake news haunting the social video medium, it could be great time for local TV news to be delivering quality content on social platforms.