Three of my favorite things at IBC 2019

There was plenty of innovation at IBC 2019 on display. Here are three of the things that really caught my eye and imagination.

Access has been working with car manufacturers to help connect them to the world of streaming video. The company’s Twine Access Car allows auto manufacturers to provide branded entertainment services to the car headend and rear-seat screens.

According to the company’s CEO Neale Foster, Access announced a partnership with Viacom to bring the entertainment powerhouse’s TV shows and movies directly to the car. While the vehicle is parked, the driver can order a Viacom movie or show through the central navigation screen. Twine enables anyone in the car to watch the video any time during the trip.

However, Twine goes further. People in the car can share any media on their devices with any other person in the vehicle, providing they are all on the in-auto Wi-Fi network. What’s more, if one person in the car has a Netflix subscription, she can share the app with anyone else in the car.

Also, if all this media sharing is stopping people enjoy the beautiful view outside the car, the front passenger or driver can “pause” the Wi-Fi to bring everyone back to re-engage with the world around them.

While latency remained a big focus at the show, VisualOn took the issue one step further at IBC. Michael Jones, SVP and Head of Business Development for VisualOn, showed me two demonstrations that turned my head. 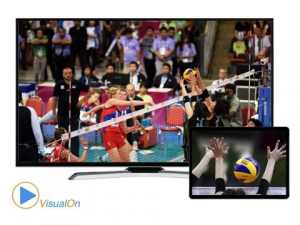 The first was a demonstration of a live volleyball tournament originally streamed in Japan to KDDI customers. The solution employed Ultra-Low Latency CMAF to keep the delay behind the live competition to 5 seconds or less. Also, viewers could pick from five different viewing angles, all perfectly in-sync.

Mr. Jones also showed me more volleyball, this time from the World Cup in Japan. With one game view on the television coming from a traditional broadcast channel, he showed me another view on tablet streaming over the network. Both screens were perfectly in-sync, and no more than 5-seconds latency behind the live game.

Slicing and dicing content to build the perfect custom stream

Kai Borchers, Co-Founder and Managing Director of 3SS, gave me the coolest demo that absolutely cannot be deployed – at least not in the U.S. and Europe. 3SS specializes in helping pay-tv operators become super-aggregators with a TV platform based on Android TV. He leveraged the Google TV OS for the demonstration.

Speaking into the TV remote, he asked Android TV to show him news about his favorite soccer team. The system asked him, “What is your favorite team?” He replied, “Chelsea.” The system then found all the TV assets that had Chelsea FC news, extracted just those sections pertinent to the request, and strung them together into a virtual channel.

Of course, content licensors would never allow platform providers to slice and dice their content as in the demo. However, it does illustrate how voice commands are transitioning to more conversational usage models and that completely customized playlist driven in real-time can make for a very compelling experience.

You can also read about three innovative ways to improve the performance of on-demand catalogs that I sure at the show here.