The growth in live streaming bandwidth is far higher than the overall growth of internet video. Here are three reasons why.

Cisco VNI forecasts that internet video will continue to grow strongly through 2022. The company says that global internet video traffic will grow at compound annual growth rate (CAGR) of 33% through 2022. In 2022, internet users will consume 282 Exabytes per month watching video globally. North America will generate about a quarter of that traffic.

Here are the trends that are driving the growth of live video in North America.

Since the launch of Sling TV in 2015, the number of people subscribing to vMVPDs has increased to nearly 9 million. Though growth has slowed for market leader Sling TV, signs are others, like Hulu Live, YouTube TV, and fuboTV continue to enjoy robust growth.

As well, viewing times are very similar to traditional pay TV. fuboTV does not state how long viewers watched for, but nScreenMedia was able to estimate viewing times from other data the company provided. The average subscribed home streamed TV for approximately two-and-a-quarter hours per day in the second quarter. fuboTV’s best customers viewed more than double the norm or four-and-three-quarter hours per day. Nielsen says the average TV viewer watched about the same as fuboTV’s best customers, 4 hours and 50 minutes per day.

As subscribers increase and spend more time viewing through services, vMVPDs will continue to be a primary driver of live streaming video.

Watching people play video games has emerged as one of the biggest drivers of online bandwidth. Twitch, the biggest online video game play sharing site, was early into the market. It now says that it hosts between 2.2 and 3.2 million live broadcasts a month and has 15 million daily active users. Sandvine says that Twitch is the fifth biggest driver of global video streaming traffic, with a 3.45% share. 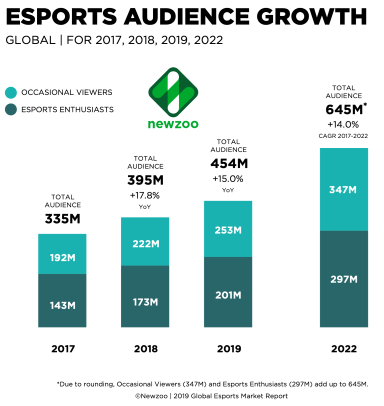 Major tournaments continue to attract large online live audiences. For example, the recent Fortnite World Cup ran over three days at the Arthur Ashe Stadium in New York. In addition to the audience that packed out the 24,000-seat auditorium, as many as 2 million concurrent streamers joined the action through Twitch and YouTube. Other major eSports tournaments regularly attract 1+m concurrent streamers.

The growth of the eSports audience shows no sign of letting up. Newzoo forecasts the global audience will be 454 million this year and grow to 645 million by 2022.

With the advent of vMVPDs, every major sporting event has some footprint online. However, many events include live streaming as a separate component of their distribution. Measured separately from vMVPD traffic, it seems that each new event breaks streaming records.

For example, consider the performance of the Super Bowl. The 2019 edition was a turkey of a game between the Patriots and the Rams. It attracted the smallest TV audience in ten years, with 5 million less than in 2018 and 16 million less than in 2015. However, the number of online viewers set a record. CBS says the average minute streaming audience was 2.6 million across its digital properties, a 28% increase from last year. NBC, which streamed Super Bowl LII, said the average minute audience for the 2018 game was 2.02 million.

Two factors will ensure sports remain a significant driver of live traffic for at least the next four years. Firstly, more sports are delivering live games over the Internet. From netball to curling, lacrosse to darts, the internet is a great way to reach minority audiences with live games. Secondly, most sports will broadcast live games over time. Secondly, major sports are beginning to license games to online providers like ESPN+ and DAZN.

Live streaming video will be fastest growing category of internet video through 2022.

Here are three significant drivers of the trend: