Pay TV executives say that 2020 cord-cutting will be slower than in 2019. Don’t believe them. Here are three reasons things are liable to get worse.

At the UBS Investor conference last week, traditional pay TV providers acknowledge 2019 has been a bad year for the industry. nScreenMedia estimates that cable, satellite, and telco TV operators will lose 5.2 million subscribers by the end of 2019. However, Charter and AT&T believe the losses will slow in 2020. They gave the following reasons for this:

Comcast, which has lost nearly half a million video subscribers in the last two quarters, said nothing about traditional pay TV in 2020. It is pinning its video hopes for 2020 on Comcast Flex, a broadband video set-top box.

Unfortunately, all the signs are that pay TV losses will accelerate in 2020, not slow. Here are three reasons more than 5.2 million people will leave cable, satellite, and telco TV in 2020.

More reasons to switch away from the pay-tv STB

The introduction of Disney+ seems to have captured the streaming public’s attention. The Disney+ app has been downloaded 22 million times globally. Apptopia estimates the app is attracting an average of 9.5 million daily active users. The app has ranked number one in the Google and Apple app stores since its launch.

HBO Max likely won’t make the same sort of splash as Disney+. However, it is liable to attract more subscribers than the current 8 million. HBO Max will cost twice as much as Disney+, but all HBO Now customers are likely to switch to it since they are paying the same now for HBO content alone. The addition of Friends and other classic shows like The Big Band Theory and South Park will also bring new customers. As well, AT&T plans to add a cheaper plan in 2021 partially supported by ads, a model very successfully employed by Hulu.

We are skeptical that Comcast Flex will capture many cord-cutters as only a handful of SVOD services are currently available. Comcast must quickly reach an agreement with major SVOD providers like Disney, CBS, and WarnerMedia. If not, broadband customers may take a free Flex box when they subscribe to broadband, but they will quickly abandon it when they can’t watch Disney+, HBO Max, or any of the other missing SVOD and AVOD services.

Charter increased the price of its Spectrum TV service in October. All tiers increased by $7.50 a month. For example, the Select Tier increased in price by 12%, to $67.50 a month. The company also raised the broadcast TV fee it charges by $1.50 to $13.50.

Comcast is also increasing its pay TV prices. For example, some Georgia subscribers will be paying $5 a month more (17% increase) for the basic TV package.

AT&T DirecTV is leaving its Family Plan’s price unchanged but boosting Premier and Xtra plans by $8 (+4%) and $7 (+6%) per month, respectively. It is also increasing regional sports fees by up $2 a month, depending upon where you live.

Earlier this year, a Deloitte survey showed that nearly half of consumers are getting frustrated by the number of services to which they need to subscribe to get the content they want. Further, 57% said they were frustrated with content vanishing from a service when it lost the rights. These data led many news outlets to conclude that people are nearing the limit for the number of services to which they will subscribe. 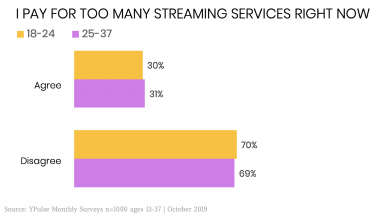 Don’t believe it. When a new service comes along with content consumers want to see they will subscribe. At least for now, there remains some elasticity in a consumer’s spending on these services. As well, under a third of 18-37-year-olds think they pay for too many streaming services. Nearly 9-in-10 believe their streaming services are worth the money.

There is a risk people will cancel a service they are not using. Hub Entertainment Research found 29% would drop a service right away to get another one, and 37% would consider dropping another down the line to keep a new one. Moreover, pay TV could be a big target for people to cut. Time with SVOD comes at the expense of watching traditional TV. With all the new online TV services, traditional TV’s value proposition is dropping by the minute in many homes. It also costs far more than any of the new SVOD services. In other words, a consumer could cut cable, take Disney+ and HBO Max and walk away with much cash in their pocket.

Pay TV executives are trying to suggest the worst of the pay TV subscriber losses are behind them.

SVOD fatigued will not be a factor in retarding cord-cutting.

~We believe this effect will only reduce churn marginally, not the overall rate of cord-cutting.