The waning influence of the PC

Posted by Colin Dixon
The signs are everywhere that the PC is falling out of favor with consumers. Cisco’s new VNI forecast, results of which were announced yesterday, forecast that the PC’s share of video consumption would fall from 74% in 2012 to just over 50% in 2017. I posited that Cisco’s estimate for the PC could be optimistic based on data I am seeing from other sources. For example, new data from the BBC released today illustrate the trend very well. However, the waning influence of the PC is a testament to the changing role of the Internet and expectations of consumers rather than a specific failing of the device. 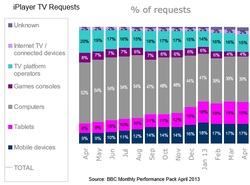 The BBC released the iPlayer Performance Pack for April 2013 yesterday. In it, the company reported TV requests broken out by device and the results continue the trend that has been established for at least a year now. iPlayer TV requests coming from PCs fell from 52% in April 2012 to 39%  in April 2013. In that same period, the share of requests coming from tablets more than doubled from 8% to 19%. The smartphone continued to grow strongly as well, from 9% to 17%. Taken together, tablet and smartphone requests now represent 36% of all iPlayer TV requests and seem likely to overleap the PC in the next several months.For watching video, the tablet seems to be a better form factor for consumers. Despite having a smaller display than the average PC or laptop, Ooyala reported in the Global Video Index: 2012 Year in Review that the tablet has better engagement. When the company looked at how many people watched a video to completion, the tablet beat the PC no matter what the length of video the consumer watched. 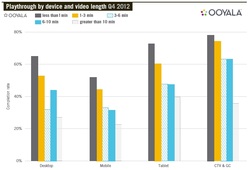 This consumer preference for the tablet is a major factor in the decline of PC sales. Sales of the devices have declined for four consecutive quarters culminating in a 14% slump in the first quarter of 2013, the biggest decline in 20 years. While the poor performance of Windows 8 has been blamed for some of the decline, the trend was set before the struggling operating system was released.The decline of the PC and staggering growth of tablets is a reflection of the changing habits of consumers and of the switch in focus of the Internet from browsing and email to all things media. Simply put, the tablet is as close as we can come today to a perfect media consumption device. There is simply no need for a mouse or keyboard when reading a book or watching a movie. And when a consumer wants to play a game or catch the news the instant-on performance of the tablet has been difficult for the PC to match.

Why it matters
Expect PC sales and usage of the device for media consumption to continue to decline sharply for the foreseeable future.

The convertible Ultrabook form-factor may help stem the decline somewhat.  With instant on performance akin to a tablet and the ability to convert to a tablet, the devices may blunt the appeal of the tablet for some. However, price points need to come down a lot to have a substantial impact.