Our viewing habits are changing as we spend much of our time at home. Increases in TV watching, SVOD membership, and the success of PVOD all look to become part of the new normal.

Increase in TV viewing and streaming will persist

Consumers have been doing a variety of things to keep themselves occupied as they shelter-in-place, including cooking and 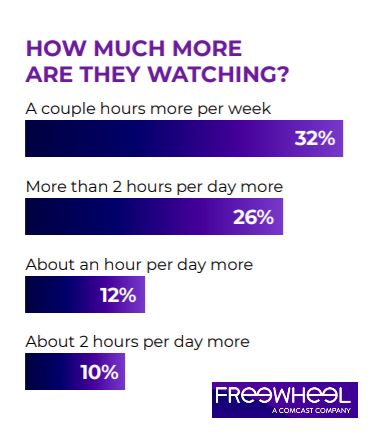 exercising more. Watching TV and streaming have also been a go-to way to fill time. Freewheel says that 80% of consumers have been spending more time watching TV. Of those, almost half say they are watching an hour or more per day more.

According to new E-POLL market research data, the change in viewing could persist once life begins to return to normal. E-POLL asked consumers:

“When the crisis is over – will you be doing more of, the same amount, or less of the following compared to what you did before the crisis?”

Parks Associates states that the number of homes with an SVOD subscription increased by six million between Q1 2019 and Q1 2020. The survey of 10,000 broadband households was fielded between March 8th and April 3rd, while much of the nation was in lockdown. Interestingly, Parks found that those trialing an SVOD service increased dramatically over the same period. The number of broadband homes trialing at least one SVOD service rose sharply from 39% to 48%.

The increase is likely due to online pay video providers offering extended free trials, and consumers having extra time to check them out. The boost in-home trials bode well for the continued robust growth of SVOD in the second quarter and beyond. Wicket Labs told nScreenMedia that the percentage of people that convert from a free trial into a paying customer is 68%. To be sure, the conversion rate could drop during these extraordinary times. However, it still suggests SVOD services are going to pick up a lot of new customers from their free trial offers.

With people unable to go to the movies in March, interest has been high in watching first-run movies in-home for the same price as a theater ticket. Hub says 74% of U.S. TV viewers say they are interested in watching these so-called premium VOD (PVOD) releases.

Hubs data is borne out by the performance of Trolls World Tour. It was originally scheduled for theater release, but NBCU decided to release the movie direct to home. Starting on April 10th, consumers could rent the film for $19.99. Universal Pictures says the film has been a big success. It attracted nearly 5 million rentals in the first three weeks, grossing almost as much as the original movie did in its first three weeks in theaters. As well, since Universal did not need to split the revenue with theater owners and distributors, it has made more money from Trolls World Tour than the original generated in five months in theaters.

Universal is doubling down on the PVOD approach. It will release The King of Staten Island direct to homes on June 12th, skipping a scheduled June 19th theatrical release. Others are following. Warner Bros is canceling theatrical release for Scoob!, taking it direct-to-home on May 15th. Disney will release Artemis Fowl through its plus service, and others have licensed movies to Netflix and Amazon.

Understandably, theater owners are not impressed. However, it is unclear when they will be able to offer an audience to movie producers. Though some state governors are urging theater owners to reopen, many are not heeding the call. As well, it is unclear when audiences will feel safe returning to theaters. Nearly three-quarters of sports fans say they will not attend live sports until a COVID-19 vaccine is available. It could be the same for theater audiences.