The fortunes of 5 connected devices

Posted by Colin Dixon
Nielsen just released the first quarter 2013 Cross Platform Report and, as usual, the data made for some fascinating reading. Nielsen saw a small uptick in Live TV viewing over the same quarter last year (just one minute a day, or 0.35%) to 4 hours and 39 minutes. As well, DVR playback increased 8% to 26 minutes a day and watching online video increased even more, by 54%, to just under 17 minutes a day. However, what really caught my eye was a table right at the end of the report which reported on household penetration of the DVR, HDTV, game console, disk player (Blu-ray or DVD) and tablet.

As expected, the numbers underscore our current love affair with tablets. Nielsen found that tablet ownership increased from 10.7M households in Q1 2012 to 23.1M in Q1 2013. In the report for Q2 2012, the tablet wasn’t even listed! It looks likely that the device will continue to grow strongly this year and, as I have discussed recently, increase its influence in the consumption of online video. 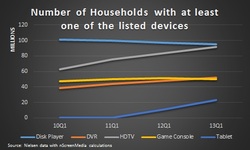 The HDTV continues to put in solid year over year growth. However, this seems more in-line with the normal replacement cycles of television sets: the growth rate for last couple of years has been around 10%. What is remarkable about this number is that it is not a lot bigger. Two significant new technologies, smart TVs and 3D, have become mainstream features over the last 2 years. In the case of smart TVs, companies such as Samsung and LG have spent a lot of money educating the market on the value proposition of a smart TV. This campaign has been very successful with 20% of homes in North America and Europe owning one and 36% of the remainder saying they want one. Yet apparently the feature has not motivated consumers to replace their existing sets any faster than they would normally have. DVR’s are continuing to penetrate consumer homes but, at least according to Nielsen numbers, the devices seem to be running out of steam. Growth has slowed from 14% in Q1 2011 to under 8% in Q1 2013. DVRs have been a slow burner from the start. The value proposition of a DVR has been very difficult to articulate in advertising and so the product has relied mostly on people seeing demonstrations in their neighbors’ homes. Now it looks like the growth of on-demand services, such as Netflix and cable VOD systems, are blunting the appeal of DVRs.

Disk players appear to be in decline. For the last two years household penetration has fallen 2.6%. This is right in line with the decline in rentals and sales. Disk sales declined 5.5% between 2011 and 2012 and disk rentals declined by 12% in the same period.* Much of the lost business has moved over to digital, in the form of subscription streaming and electronic sales and rentals.

Finally, the game console seems to have reached its peak in the U.S. market. The year through Q1 2013 saw the first decline in sales of the devices, with a 2% drop. The industry may be hoping for a revival with releases of new consoles but this seems unlikely. Wii U has seen disappointing sales since its release late last year, and with price points for the new Xbox One and PS4 set at eye popping $499 and $599 its unlikely we’ll see a return to growth for the consoles.