Why Netflix is better off out of China

Tencent Video claims more Chinese subscribers than Netflix has US customers. Despite the huge numbers, Netflix is unlikely to be sorry it avoided entering the Chinese market.

According to a press release issued by Tencent, the Chinese internet giant’s SVOD service reached 62.6 million subscribers in February of this year. The company claims it increased the number of subscribers an amazing 20 million between October 2017 and the end of February 2018. Netflix had 55 million U.S. subscribers and 63 million International customers at the end 2017. 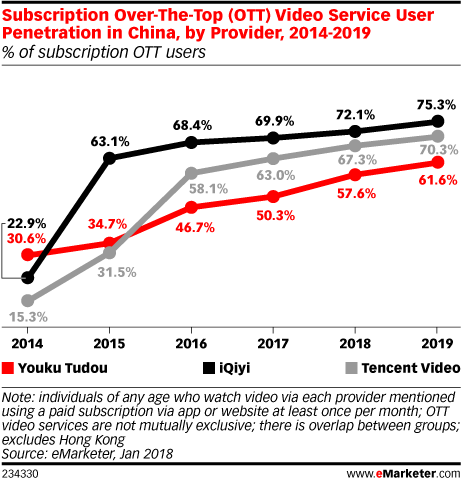 iQIYI, which is in the process of going public on the Nasdaq stock exchange, says it had 60 million subscribers at the end of February.

eMarketer numbers do not agree with Tencent’s assessment of its market position. The company says that 70% of Chinese SVOD customers subscribe to iQIYI and 63% subscribe to Tencent Video. The third-placed SVOD service is iYouku Tudou with 50%.

How much revenue does Tencent Video drive?

Overall, Tencent earned over $20 billion in revenue in 2016 and could reach $25 billion in 2017. However, it does not look like Tencent Video contributed very much to overall company revenue.

Tencent does not report how much revenue the SVOD service earned. However, we can estimate how much it currently charges subscribers. iQIYI is reported to charge 20 RMB ($3) per month, though this estimate may be on the high side. Cable television in China charges about $1 per month for an entry-level package and $2 for an expanded package. A reasonable estimate is that Tencent Video costs between $1 and $3 per month. That means Tencent Video generated at most $250 million in the last year or just 1% of Tencent’s $25 billion.

Netflix is better off licensing in China

Looking at the situation for Tencent Video, it is no surprise Netflix decided to step back from entering the Chinese market. Netflix is facing similar conditions in other markets, like Malaysia and Indonesia. In those markets, it is failing to make any headway since it continues to charge at least three times as much as other video providers like iflix.

If Netflix had entered the Chinese market, it would either have had to match the price of Tencent Video or charge more and fail to gain any market traction. Either way, it would never have made money in China. A much better approach is the course of action it chose to follow: license content to iQIYI.

The 1.38 billion inhabitants of China present a tantalizing target for U.S. video providers.

Aside from the difficult political climate for U.S. media companies, the dynamics of the Chinese video market make it almost impossible to make money with a standalone service.

Licensing content to Chinese SVOD companies is a better strategy.