The habits of a nation are on display in new data from the BBC. It emphasizes that, while old TV viewing behavior is still very much in evidence, it is beginning to give way to the more personal approach enabled by mobility and the cloud.

The BBC iPlayer data for the holiday period reveals much about the impact of the tablet on television viewing in the UK. For the first time, iPlayer video requests from tablets exceeded those from the computer. For the 5 day period December 26th through the 30th, more UK viewers turned to the tablet to view iPlayer video than used the PC for this task.

Take December 27th, for example. On this day, tablets were responsible for 30% of video requests from iPlayer. PCs were used 28% of the time. The smartphone was the next most used device, commanding 20% of requests. As a group, connected TV devices (including game consoles, smart TVs, connected Blu-ray players and Internet STBs) were used the least, with just 19% of requests. 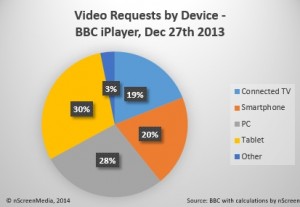 As in the U.S., many people in the UK got a tablet on Christmas day. A strong indicator of this was number of downloads of BBC iPlayer. The BBC reports that for the period December 21st through January 1st, there were nearly 1M downloads of the mobile client (almost a 5% increase in the total of 20M downloads to date.)

Interestingly, tablet requests didn’t peak above PC requests until the day after Christmas. Why didn’t all those freshly unwrapped tablets immediately set off a storm of iPlayer viewing? With families typically spending Christmas Day together, it seems many continued the standard practice of watching TV as a family on the television. However, the day after Christmas, it appears viewers grabbed their iPads for some personal time to catch up on holiday shows they had missed. 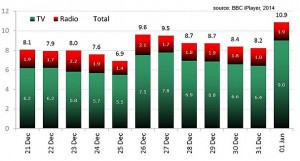 Many in the UK watch more TV over the holidays. Monthly viewing is typically an hour more than in November. However, the trend over the last 4 years for December has been for declining television watching. Viewing in that month has fallen 12% overall between 2010 and 2013. The data suggests much of that communal watching has switch to individual consumption on tablets and smartphones.

The rhythm of viewing during the holiday period is confirmed by the BBC iPlayer total requests data. Daily requests remained steady at normal levels before the holidays, but fell 14% on Christmas day. December 26th (Boxing Day) saw requests shoot up 20% above normal and remain high throughout the following week. January 1st saw the most ever requests in a single day, nearly 40% above normal.

It’s likely the U.S. experienced very similar viewing patterns as the U.K. during the holiday period. Look for more data on nScreenMedia tracking this behavior in the U.S. in the coming weeks.

It is a common belief that tablets are beginning to take video viewers away from television.

Data has been sparse supporting this hypothesis.

BBC iPlayer data shows tangible evidence of this change for the 2013 holiday season.