How do you build a production studio to deliver content to passionate anime fans in direct-to-consumer services? Margaret Dean, Head of Crunchyroll Studios, tells us how staying true to the genre is key.

Ms. Dean has designed and re-designed several studios, including Columbia-TriStar TV, Warner Brothers Animation, Mattel’s Playground Production, Omation (Steve Oedekerk), Technicolor Animation and Wildbrain Entertainment. I asked her what attracted her to build Crunchyroll Studios. Part of the answer is an opportunity to go deep on just one genre. Another part is to follow the eyeballs to direct-to-consumer services.

Chapter 2: Producing content with and for a close community (5:30)

Tracy wanted to know how the community is part of the creation process. Ms. Dean says that most people creating the content are already anime fans. She discusses how it is sometimes a struggle for them to remain true to their passion. 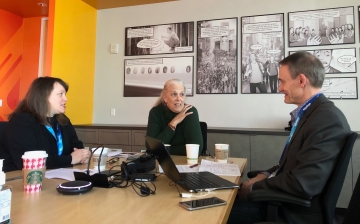 The first thing is to figure out the goal, but it is usually different for each studio. Ms. Dean discusses what the objectives were at several of the studios she has run. At Crunchyroll, the goal is different again.

The second thing is to evaluate what sort of team is required. She identifies the key personnel required to ensure the production team can excel.

High Guardian Spice, Crunchyroll Studio’s first original series, is a 2D production and is being drawn by hand. I asked Ms. Dean why she decided to take this route rather than using 3D rendering tools like Maya. For her, it all goes back to respect for the medium the studio is dedicated to serving. Tracy wanted to know if the studio might be interested in doing AR and VR experiences. For Ms. Dean, it all comes back to the story that you wanted

The Crunchyroll audience is very diverse. As well, Ms. Dean, who is President of Women in Animation, is a strong advocate for diversity in her teams. Both Tracy and I wanted to know how she is bringing that approach to Crunchyroll Studios. She reminded us that some of the best stories come from people outside of the norm.

Chapter 6: Where Crunchyroll Studios is headed (22:30)

I asked Ms. Dean where she will take Crunchyroll Studios in the future. She sees the studios as a force for developing the next wave of storytellers. Tracy wondered to what extent content and ideas will cross-pollinate between the various parts of Otter Media and WarnerMedia, of which Crunchyroll is a part.