Netflix’ first interactive show Black Mirror: Bandersnatch has made quite a splash. It has already attracted a lawsuit. How did the story work, what was the experience like, and can the approach be used elsewhere?

In this episode of T Time, Tracy and I discuss Black Mirror: Bandersnatch with interactive TV expert Nick DeMartino. 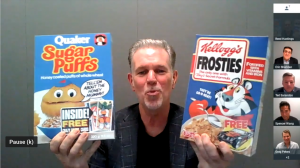 [Update 1/17/19: During the Netflix Q4 2018 earnings call on January 17th, the company gave fresh details about Bandersnatch. Ted Sarandos, Netflix CCO, said that a total of five hours of produced content was created for the interactive show. Read Hastings, Netflix CEO, said that 73% of show viewers opted to have Stefan, the show’s protagonist, eat Frosties for breakfast. Clearly, Netflix is carefully monitoring, collating, and correlating all the selections in the interactive experience.] 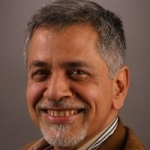 What was Black Mirror: Bandersnatch about and how was it put together and delivered to viewers?

While interactive storytelling is nothing new, Bandersnatch broke new ground in a couple of areas.

Some aspects of the show worked very well; others were not as successful.

It turns out the production costs per viewed minute for an interactive story like Bandersnatch are very high.

The story was about the development of a video game but was the episode a game masquerading as a TV show?

All was not smooth with the delivery of Bandersnatch. We discuss some of the problems that we encountered.

Charlie Booker, the creator of Bandersnatch, created a multilayered storyline that makes it difficult to figure out who is in control.

Chapter 8: Applicability of the approach to other stories (17:20)

The multi-layered storyline works well in an interactive approach and is a good fit for the Black Mirror audience. However, does the same approach apply to other types of stories and audiences?

It was not possible to watch Bandersnatch on all the devices upon which the  Netflix app runs. Figuring out on which device to watch is problematic, and a viewer may encounter streaming performance problems depending on which device they choose.

We discuss the Chooseco lawsuit against Netflix over Bandersnatch.

Bandersnatch uncovered some novel ways for advertisers to reach their audience.

Europe could overhaul U.S. as Netflix most significant region

Netflix benefits from TV’s decline. Can Disney and AT&T?