Becoming the daily default TV service for tens of millions of people is a costly business. However, SVOD services can be successful with mostly weekly or monthly users.

Netflix as a first mover and most popular SVOD service has become the yardstick by which all SVOD services are judged. However, many services aren’t in the same business at all. In particular, having a subscriber use the service every day is not necessary for success.

Some services aspire to be a daily television option for a large number of people. They invest in quality content that cuts across a broad swath of genres and delivers mass-market appeal. They also release new shows on a daily and weekly schedule. They position their service as a general entertainment option that people can come to daily and find something appealing to watch anytime, no matter what their mood.

Netflix is by far the best-known brand in the daily service category, and its strategy seems to be working. According to Hub Entertainment research, 22% of TV viewers with broadband said Netflix was their default TV service in 2018, versus 39% for TV. More 18-34-year-olds say Netflix is their default (35%) than live TV (26%.) Hulu, with its deep catalog or recent television shows, also aspires to the same role.

Disney+ and HBO Max would also like to become daily TV services, though it is unclear if their catalogs will be deep enough at launch to achieve it. In the near term, Disney’s best chance is perhaps with families with children. The family-friendly content mix should play well with this group, and the repetitive viewing habits of kids make daily usage a necessity.

Many services can attract and retain a sizable paying audience by providing a service that people touch base with once or twice or week. Their content strategy seeks to deliver one or two high-quality fresh episodes or movies per week. Their content also covers a broad range of genres or focuses on a content genre with very broad appeal. They may also back up the thinner catalog of new content with an extensive library of older shows and movies. 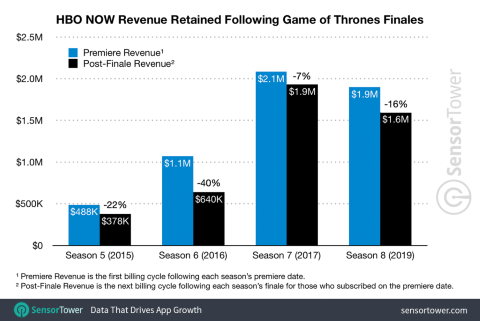 HBO Now has built an audience of 5 million using this strategy. CBS All Access has garnered 2.5 million. From the look of the shows in Apple TV+, it too is in the weekly category. However, giving the service to all new Apple device purchasers should boost subscribers far above HBO Now.

Some SVOD services can achieve success with a service where many users only check in once or twice a month. However, monthly services are not usually general entertainment services. They pick a genre that has mass-market appeal and super-serve that audience. By closely identifying with a single genre, monthly services also confer on subscribers a sense of “belonging” to the group in question. In other words, the service may be as much a part of a lifestyle choice as an entertainment option.

Services such as CuriosityStream, Marquee TV, and WWE Network (which has 1.5 million subscribers) may fall into this category. These services certainly may have many daily and weekly users. However, many weekly or monthly users see enough value in their usage to justify continuing to be a subscriber.

Making an SVOD service a part of the daily lives of tens-of-millions of users is an expensive, content-intensive business.

SVOD services can still be successful if subscribers use them weekly or monthly.