SVOD services trounced pay TV in the ACSI Telecommunications Report 2018. However, there was one category for which the services rated poorly: the availability of new movie titles.

In the 2018 survey, ACSI asked consumers about leading SVOD for the first time. What they heard back was that consumers are generally very happy. The category received a report leading score of 75. Other services categories didn’t fare nearly as well. For example, pay TV was rated at 62, a decline of 3% from last year, while video-on-demand services received a rating of 68.

Netflix was the top-rated SVOD service, with an overall rating of 78. It shared the top slot with vMVPD service PlayStation Vue and gamer streaming platform Twitch. Amazon Prime Video and Hulu received a score of 75, and HBO Now and Starz tied at 72.

ACSI asked the survey participants to rate different aspects of the streaming services. In most categories, they did well. Ease of understanding the bill and website satisfaction topped the list with a score of 80. Overall performance and reliability and ease of use also did well, with scores of 78 and 77 respectively.

However, there was one category where the services did very poorly: availability of new movie titles scored just 69. The number of movies available in the services faired only marginally better. 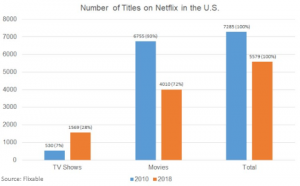 Netflix has been deemphasizing movies in its catalog. According to Flixable, the number of movies available in the service has decreased 40% since 2010, while the number of shows has increased 300%. That said, 72% of total catalog is still movies.

With so many movies available, why would Netflix score poorly for movie selection and currency? Ted Sarandos, Netflix’ head of content, says it is because consumers that are interested in a movie have usually seen it before the title shows up on Netflix.

The availability of recent movies could get worse for Netflix next year. The company has an exclusive deal with Disney that brings titles from Marvel, Pixar, Star Wars and more to the SVOD giant. However, that deal expires in 2019. Disney declined to renew it, electing instead to release these titles through the company’s as-yet-unnamed SVOD service set for launch next year.

With Disney movies off the table, competition to license from other studios is likely to increase. Increased competition inevitably means higher prices. However, Netflix thinks it has a better way to spend that money: produce its own movies.

In 2018, Netflix plans to release 86 movies, more than twice as many as Universal Pictures and nearly 9 times as many as Disney. Of course, quantity is no substitute for quality, but the bar for success for Netflix movies is liable to be lower than for movies released through theaters. A traditional movie must create buzz to motivate a potential viewer to go see it. Netflix may only need to make sure a movie is recommended to the right viewers to motivate them to click play.

Whether Netflix’ approach to movies will be sufficient to improve consumer ratings in ACSI’s 2019 Telecommunications Report is anyone’s guess. More important for the streaming service, though, is if it can fill the hole left by Disney, and keep consumers signing up and watching.

However, the services scored poorly for movie availability.

With Disney movies leaving the service next year, the situation could get worse for Netflix.

Netflix plans to boost movie availability by releasing 86 movies in 2018.