Top name US television shows and movies still command a lot of attention around the world, and Netflix and Amazon have led with them to spearhead their global expansion. However, to grow and solidify their presence internationally, what they do in local regions is becoming increasingly important. 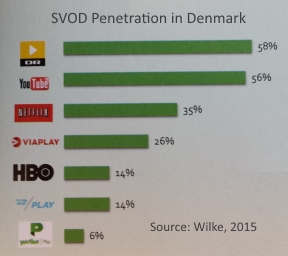 In some regions of the world Netflix needed no introduction, and quickly established itself on the strength of the name alone. For example, in Scandinavia the company established an 8% penetration of households just five months after its release, and is now in 2 of every 5 households. In other regions, the company’s name was simply not enough. To address this, Netflix turned to local operators to help get introduced to the local audience. In Europe, it partnered with local operators to resell the service, and in some cases the Netflix client appears on the TV operator’s set-top box.

It is continuing this approach as it works to grow its audience in the 140 countries it became available in at the beginning of 2016. For example, in Hong Kong the company just inked a deal with local IPTV operator PCCW. The Netflix client will be available on televisions through PCCW’s set-top box. This is quite a coup for Netflix, as PCCW has a competitive service called Viu OTT.

Netflix has always looked to license regional content that it felt would have an international appeal. Shows like The Bridge and Rita are both good examples of this approach. The company has also produced shows like Narcos and Lillyhammer with a multi-country cast and production team.

Now Netflix is producing TV shows specifically targeted for local markets. Marseille, a French political drama, will be released in May, and it is working on an Italian series called Suburra for release next year. However, it still has an eye on ensuring the shows have an international appeal. Marseille stars Gérard Depardieu, one of France’s most globally known actors.

Amazon.com is following in Netflix’ footsteps. The company is producing its first show outside of the US, a German thriller called Wanted. It has hired German actor Matthias Schweighöfer to direct and star in the production.

From the beginning of its international expansion Netflix has needed technology to help it manage specific regional conditions that could retard its expansion. In Canada, very low data caps on broadband meant that streaming at the highest quality would quickly burn through a user’s data allotment. The company addressed this in two ways:

Amazon introduced the ability to download many of the titles in its Prime Video service last year. The feature is available to users in the US, UK, Germany, and Austria. Again, this helps users in two ways:

There is still much to do in both companies transition to more local thinking. For example, Netflix still does not have a plan to accommodate local decency laws, and could be banned in some countries because of it.

US SVOD companies Netflix and Amazon have led with Hollywood content in their international expansion.

They are now switching to a more local focus to capture and retain subscribers.

They are leveraging local operators and content providers, as well as technology innovation, to customize the service mix to regional audiences.