U.S. home entertainment spending grew sharply in 2019. The amount Americans spent on SVOD, and buying and renting movies increased an impressive 8.4%, according to the latest Digital Entertainment Group (DEG) data. U.S. consumers spent $25.2 billion in 2019, versus $23.2 billion in 2018.

To gain some perspective, let’s compare spending over the last several years to 2006. Fourteen years ago, American consumers spent $21.6 billion on home entertainment. Spending was $4.6 billion more in 2019. However, correcting for inflation over the last 14 years shows that we are spending $1.8 billion less today than we were in 2006. That said, growth between 2018 and 2019 was nonetheless impressive.

Virtually all the increase in home entertainment spending came from SVOD services in 2019. Spending was up 24% over 2018, to reach $15.9 billion. Only one other category tracked by DEG grew. Digital movie sales (called EST, or electronic sell-through, by DEG) increased 5%, to reach $2.6 billion. 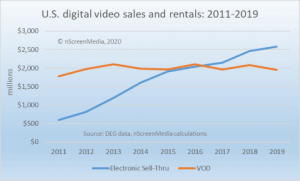 Digital sales have been growing steadily over the last nine years. In 2011, consumers spent just $0.6 billion buying digital copies of movies. In 2019, they spent $2.6 billion. To be sure, the growth was not enough to compensate for the loss in disc sales, which declined $5.6 billion over the same period. However, it does suggest that digital sales will continue to have some claim over consumer spending in the future.

We cannot say the same for online movie rentals. Over the last nine years, sales have hardly changed at all. In 2011, online rentals yielded $1.8 billion in revenue. They increased to $2 billion in 2013 and have muddled along at about that level ever since.

Where the money for SVOD growth is coming from

SVOD spending increased $3.1 billion over the last year. Are consumers spending more overall on entertainment or taking money from somewhere else to fund their appetite for new services like Disney+ and Apple TV+? Overall, video rentals and purchases (digital and physical) have decreased $1 billion over the last year. So, about a third of the SVOD revenue increase has come from money formally spent on transactional video.

The remaining $2 billion increase in SVOD spending boosted total home entertainment to over $25 billion. However, it looks like consumers have been taking money from another entertainment category not tracked by DEG: pay TV. nScreenMedia estimates that subscription revenue from MVPDs and vMVPDs decreased $3 billion between 2018 and 2019.

Consumers are not spending more on entertainment overall. They are taking money from pay TV and video rentals and purchases and redirecting it to fund their burgeoning interest in SVOD services. With the entry of Disney+ and Apple TV+ at the end of 2019 and HBO Max in 2020, the trend is likely to accelerate in 2020. Disney+ more than any other service will exacerbate the revenue shift to SVOD. After all, who will rent or buy a classic Disney, Marvel, or Pixar movie on disc or digital if they have access to it through Disney+?

Home entertainment spending grew significantly in 2019, driven by a 24% increase in SVOD spending.

However, the entertainment pie is not getting bigger.

Consumers are taking money from pay TV and video rentals and purchases to fund their SVOD obsession.