At one time, we thought online delivery would kill the tradition of watching television together. Today, connected TVs (CTVs) could be bringing us back together as watching with someone else is far more common with SVOD than traditional linear television.

New Nielsen data shows that connected TV viewing has grown in importance during shelter-at-home orders. Moreover, it has sustained an elevated level of usage throughout.

Back at the beginning of March, before stay-at-home orders were widely in place, Nielsen says about 2.7 billion hours of streamed viewing were delivered per week by CTVs. By the end of March, streaming hours had increased by 45% to reach 3.9 billion. Although it has trailed off a bit, usage remains 30% above pre-lockdown levels. 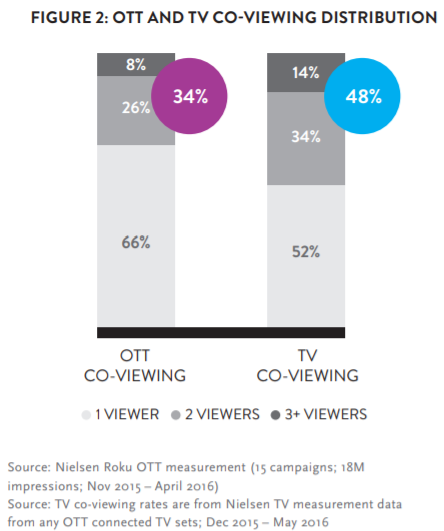 Nielsen compared how much TV was watched with another person between traditional TV viewers and Roku streamers between late 2015 and early 2016. The data showed that only 34% of viewing events involved two or more viewers on the Roku versus 48% via traditional TV.

In the intervening five years, the combination of SVOD and the connected television has become rooted in American living rooms as the hub of co-viewing activity. Before lockdown, 47% watched SVOD with at least one other person in the first week of March. Co-viewing peaked at 55% by the end of the month and remained higher at 52% in the first week of May. Though cable TV viewing followed a similar pattern, it did so from a much lower level. 33% watched cable TV with another person at the beginning of March. Co-viewing peaked at the end of March at 37% and declined to 35% at the beginning of May.

Co-viewing behavior is typical to all age groups. The group that likes to watch with others the most is the 35 to 49-year-olds. In the first week of May, 53% watched SVOD with one or more other people. People in the 18 to 34 and 50 to 64 age groups both co-viewed at the same rate at the beginning of May: 48%. 45% of those 65 or older watched with someone else at the beginning of May. 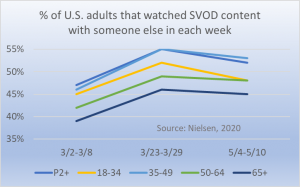 Co-viewing rates at the TV increased during the lockdown and have stayed significantly higher than before for all age groups.  For example, 46% of 35-49s watched with someone else during the first week of March. Co-viewing peaked at the end of March at 55% but remained 7% higher at the beginning of May than in March.

Streaming and co-viewing rates for SVOD will remain high

Shelter-in-place orders have allowed large numbers of people to integrate SVOD streaming into their TV lives. As things slowly return to normal, expect usage to remain higher and continue to grow from the new elevated level.

Why is SVOD co-viewing significantly higher than traditional TV? Nielsen does not offer a reason. However, ad-free viewing creates a more movie-like experience. People may simply prefer to watch uninterrupted via an SVOD service when with a partner or other family member.

At one time, it looked like streaming to personal devices could wipe out the common practice of watching TV together.

New data shows that far from wiping it out, co-viewing on a CTV is far more common with SVOD than with traditional TV.

Co-viewing is popular with all age groups.