To be sure, people have been streaming a lot more as they shelter in place. However, some services have benefited, and others not so much. Here is why.

According to new data from comScore, the already vigorous growth in streaming service use received a massive kick from stay-at-home consumers in March through early May. Consider what the company says has happened to smart TV streaming. In February, there was a 22% increase in gigabytes delivered to smart TVs versus February 2019. In March, the increase was 41%, and for the first ten days of May, the increase over 2019 was 60%. Streaming media players, phones, and tablets saw similar patterns. Gaming consoles and PCs saw much smaller increments.

With such a considerable increase in the amount of SVOD C-19 viewing, pretty much every service has seen increased the number of streaming hours consumed. However, some have increased their overall share, and others have not. Comparing streaming hours delivered between February 3rd and May 11th, comScore says Netflix increased its dominant share by 1.5%, to deliver 26.7% of streaming hours. Amazon Prime also gained 1.5% share to reach 11.4%. Disney+ also boosted its share to reach 4.8%, a 0.5% increase from February.

Good and bad news for Disney

comScore shows the increase in viewing hours for five top services relative to their performance in February. Looked at this way, Disney+ is the clear winner. Around March 30th, it was delivering 80% more video than in February. Usage quickly tapered off to settle between 30% and 40% above February’s level.

It was not all good news for Disney. Hulu saw the weakest performance of the five services tracked by comScore. It saw viewing hours struggle to a peak of 25% above February levels, but it has since fallen back to pre-C-19 viewing levels.

Netflix, YouTube, and Amazon Video have each sustained increases around 20% through the shelter-in-place period.

JustWatch is a streaming guide with 20 million users across 46 countries. It tracks the number of titles added to or 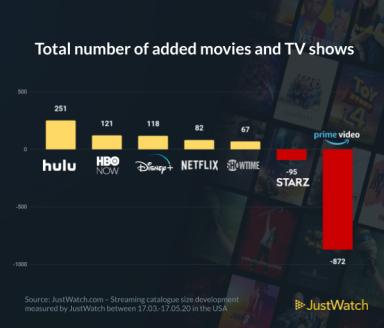 subtracted from each of the primary SVOD services. Between March 17th and May 17th, the company says Hulu added 251 movies and TV shows, more than twice as many as Disney+ and three times as many as Netflix. The company says Amazon Prime video removed 872 titles from its library.

How can Hulu have added the most content and seen no benefit for it? The service relies heavily on ABC, NBC, and Fox for its new content. Initially, television networks continued to deliver new episodes of existing shows. However, as the impact of the production shutdown started to bite, new episodes dried up, and Hulu’s gains in viewership evaporated.

Disney+ outperformed all others likely because of its newness. With more time at home, people suddenly had time to watch their favorite movies from the Disney archive. As you might expect, people quickly grew tired of old movies, and viewership tumbled. The service is also now suffering from the production shutdown and has brought forward movie releases to compensate. For example, it brought Star Wars Episode IX: The Rise Of Skywalker to Disney+ early on May 4th and saw hours delivered rise quickly to near 50% above February levels. Watch for a similar bump in usage on June 12th when Artemis Fowl is released to the service.

Why Amazon Prime Video is an outlier

The outlier, at least according to JustWatch, is Amazon Prime Video. Though it has lost nearly 900 titles, it has seen a percentage usage increase just as big as Netflix and YouTube. The resolution to these seemingly contradictory facts lies in the fact that most of the 112 million U.S. Prime members joined for the free shipping, not to access Prime Video. When many suddenly found themselves in lockdown, Prime Video was one of the few new places to which they could turn for quality ad-free entertainment without having to pay anything extra.

Not all the top services have benefited from the increase in SVOD C-19 viewing by stay-at-home viewers.

For example, Hulu has seen all its gain evaporate despite adding many new title.

Amazon Video, on the other hand, has removed 900 titles and seen usage increase 30%.