Video sales and rentals continued to decline in 2017, with Q4 disc sales tumbling 22% over the previous year. Meanwhile, SVOD revenue jumped 30%. Nearly half of every entertainment dollar a consumer spends goes to SVOD services.

Normally, video sales are strongest in the fourth quarter, as consumers give the gift of movies during the holiday season. According to new data from the Digital Entertainment Group (DEG), though Q4 disc sales revenue was higher than any other quarter this year, it was 22% lower than Q4 2016. Sales reach $1.45 billion, compared to $1.2 billion in Q1 2017 and $1.87 billion in Q4 2016.

Electronic video sales (EST, as DEG calls it) had performed well in the first three quarters of 2017, but the fourth quarter was a different story. There was no increase over Q4 2016, and just a 4% increase over the previous quarter.

The picture for the video rental industry was bad across every distribution medium. Store rentals fell 20% between 2016 and 2017, kiosk rental revenue fell 16%, subscription disc rentals declined 17%, and electronic rentals (VOD, as DEG calls it) was off 17%. Overall, rental revenue declined from $4.66 billion in 2016 to $4.1 billion in 2017.

In the past, SVOD revenue hasn’t shown much seasonal change. Up until 2015, it increased steadily quarter after quarter. For example, in 2015 quarter-over-quarter revenue increases were in a tight 17%-20% range. The trend changed in Q4 2016, with a quarter-over-quarter increase of 24%. In 2017, QoQ growth sputtered along, finishing with a 35% spike in Q4 2017. The change in growth trend could indicate that consumers are loading up on SVOD content for the holidays and then canceling services in the New Year.

For the year, subscription streaming services grew revenue from $7.29 billion to $9.55 billion, an increase of 31%.

Where the entertainment spending went in 2017 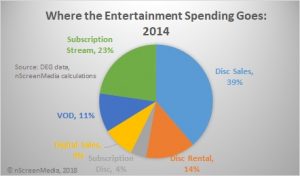 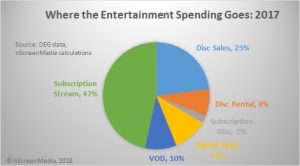 entertainment budget on in 2017 than in 2014 is digital video sales. It increased share a modest 2%.

The inexorable growth of SVOD, at the expense of every other entertainment medium, continued in 2017.

By the end of 2018, SVOD will account for more than half of home entertainment spending