If intentions were actions, cord-cutting would likely switch from a trickle to a flood. A new service called Suppose TV could remove the log jam.

Many interested in changing pay TV providers, few do

According to data from TiVo, nearly half of pay TV subscribers could potentially leave their current pay TV 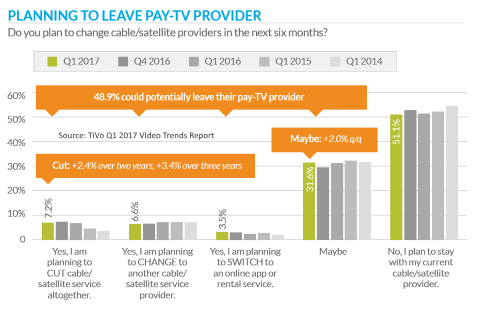 Why do so few people follow through on their intentions? Turns out evaluating all the options has become a very complicated process. And it could be simply too daunting for many.

What channels do people really need?

The first step a consumer needs to take to figure out if other options fit their needs is to understand what channels they watch. This sounds like such a simple step, but it is anything but.

Assuming that a consumer can figure out the 10 to 20 channels they absolutely must have, figuring out which other service provides them has become a major headache.

The options are overwhelming

DVR service, must have functionality for many, is not available in all the services. Sling TV, PlayStation Vue, and Hulu Live have it, and DirecTV Now does not. As well, there are big differences in functionality between the implementations. For example, PlayStation Vue subscribers can’t skip ads, Sling TV users can.

Consumers also need to include the possibility of using SVOD services like HBO Now and CBS All Access. These services could fill in holes left by the vMVPDs.

And when it comes to comparing prices between all the options, the complexity goes to whole new level. Is it any wonder many would like to switch providers and so few do?

Launching today, Suppose TV wants to ease the burden on consumers of sifting through all the options. The site compares pricing, channels, and options between all the major pay TV entertainment providers, including vMVPDs and major SVOD services. And there is no charge to use the service.

When users arrive at the site they can select the channels that matter to them the most. They can also select a few options such as DVR, number of simultaneous streams, and if they want to get more content or save more money. They can also prioritize the channels in their list by dragging and dropping them.

When I tried the service out I selected the top 10 most popular channels^, and required DVR functionality. Suppose TV tells me the cheapest option available to me in the San Francisco Bay Area with all the channels I requested is Dish Network at $49.99 per month. However, that requires a 2-year contract. If I want to stay monthly, and am willing to give up PBS and Discovery channel, Hulu Live provides everything else I need for $10 less per month. Suppose.tv also suggested I could save $9 per month over Dish by subscribing to Sling TV Blue and CBS All Access and forgoing PBS and Discovery Channel.

Suppose TV doesn’t handle the differences in DVR functionality I described above, and it doesn’t include the possibility of using over-the-air channels. For example, a Channel Master over-the-air DVR with Sling TV would make my monthly payment just $30, and I’d only have to give up Discovery Channel. That said, it’s the simplest way to compare options. And given that it is free, what’s not to like in that?

Far more people are considering switching their TV provider than follow through on the intention.

The complexity of evaluating all the options is likely to blame.

A new service called Suppose TV aims to make it easier to make the comparisons.