Netflix CEO says you can’t rely on subscriber numbers and revenue to judge how Apple TV+, Disney+, and HBO Max are doing. He’s right, and it will be tough measuring SVOD success so we can figure out who is winning in the streaming wars for at least the next year or so.

“You’ll hear some subscriber numbers, but you can just bundle things, so that’s not going to be that relevant. So, the real measurement will be time — how do consumers vote with their evenings? What mix of all the services do they end up watching?”

Why would the CEO of the most successful SVOD service suddenly want to change the metrics by which it is judged? After all, by the two most commonly used parameters, subscriber numbers, and revenue, Netflix is far ahead of its nearest rival.

The reason he is suggesting the move is that for the next year or more, it will be virtually impossible to judge new entries from Disney, Apple, and AT&T by subscribers and revenue. Firstly, Apple, AT&T, and Disney will not break out revenue separately for their fledgling services. So, using revenue to measure success is a non-starter.

As well, Netflix reports the number of paid subscribers it has, but AT&T, Disney, and Apple won’t do the same. Each company is using free offers to drive quick and wide acceptance of their service. That means any SVOD subscriber numbers they report will be distorted by large numbers of free subscribers. Just how significant will the distortion be?

Disney announced it would make Disney+ available for free for one year to Verizon Wireless unlimited customers. Verizon has 119 million wireless customers, of which 114 million are post-paid customers. Verizon doesn’t break out how many customers are on unlimited plans, but it probably has 10s of millions of people on the plans. Disney is preparing a marketing campaign for Disney+ that it expects to drive awareness above 90%. In other words, it will likely get in the region of 10 million-plus Disney+ activations out of the Verizon wireless deal. 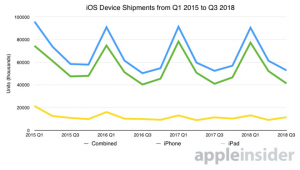 Apple announced that anyone purchasing a new iOS device would receive one year of Apple TV+. Apple shipped approximately a quarter of billion iOS devices between Q3 2017 and Q3 2018. Assuming it does close to that again over the next year, 250+ million people will have free access to Apple TV+ content. How many will follow through and try out Apple TV+? That is hard to say, but if just 10% give it a try the company can claim 25 million subscribers in only one year.

AT&T’s free offer for HBO Max is the most difficult to assess. Existing AT&T wireless customers that already subscribe to HBO through another AT&T service (like U-verse TV or AT&T TV) will receive HBO Max for free. The Verge estimates that pool to be about 10 million subscribers. Existing HBO Now subscribers that are direct-billed (not through Amazon Channels or other third parties) will also receive the free offer, potentially adding another 2 million subscribers.

No reliable measure of SVOD success

You can see Reed Hastings’ point. The success of Disney+, HBO Max, and Apple TV+ can’t be assessed by looking at subscriber numbers unless the companies report on paying subscribers (which they won’t.) As well, there won’t be any revenue numbers to compare at all. However, using time spent using the services is also a challenge. Services typically don’t reveal the data – including Netflix – and there is no accurate independent measure of it.

So, we are entering the most intense period of the streaming wars without a reliable metric to judge how any of the new entrants are doing. Keep this in mind as you hear the claims and counterclaims about subscriber numbers over the coming months.