New research data shows that streaming media player growth is flattening. However, the number of connected TV homes continues to grow strongly, thanks to smart TV.

New research from Parks Associates shows that 39% of US broadband homes own a streaming media player (SMP) box or stick, an increase of just 1% from 2018. The slow growth is in close agreement with data released last month from comScore. The company says that 49% of Wi-Fi households have an SMP, up 1% from 2018.

Parks goes on to say that the SMP market in the US is essentially a two-horse race. Roku and Amazon Prime Video SMPs own almost 70% of the market. Roku is ahead with 39% to Fire TVs 30%. However, Fire TV devices are growing faster. Roku’s share increased 2% while Fire TV grew 6%. Apple TV and Google Chromecast are a long way back in third and fourth places respectively, with well under half the penetration of Roku.

According to comScore, the growth of all connected TV devices remains strong. The company says 64 million Wi-Fi homes streamed content to a connected TV in March 2019, up 7% from one year earlier. That said, growth seems to be slowing there too, as connected TV streaming homes increased by 19% between 2017 and 2018.[i]

Though smart TV growth has cooled somewhat in the last year, it remains strong. Smart TVs carried the growth load over the previous year. The number of homes streaming content to a smart TV in March 2019 increased by 23%, to 29 million. Growth between 2017 and 2018 was 31%.

Roku dominates the connected TV world in the US much more strongly than the Parks data suggests. Roku CEO Anthony Wood said:

“We estimate that Roku TVs sold by our OEM partners accounted for more than one-in-three smart TVs sold in the U.S. in Q1, as we gained significant market share.”

Data from IHS Markit seems to back up his claim. Both Roku and Amazon license their TV operating 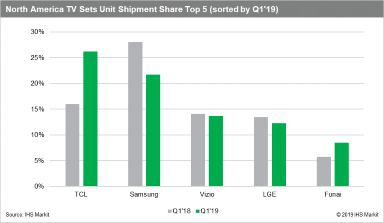 systems to TV manufacturers. However, it looks like Roku is far ahead in the market. Roku OEM TCL became the biggest shipper of TVs in the US market for the first time in the first quarter of 2019, ahead of giant Samsung. Another Roku OEM, Funai, was the fifth biggest shipper. No Amazon licensee appeared in IHS Markit’s top five list.

Strategy Analytics says that in the first quarter of this year, there were 41 million Roku smart TVs and SMPs in use, accounting for 15.2% of all media streaming devices. It also expects the company to increase to an 18% share, or 52 million devices by the end of the year.

It is a different story in Europe. There Amazon Fire TV dominates, with Apple TV a distant second.

Connected TV growth remains strong, though the device driving the increase has switched.

Roku dominates the connected TV market in the US.

[i] nScreenMedia uses the following definitions for TV devices. Smart TVs have internet connectivity built and can stream online video directly. Streaming media players are devices dedicated to delivering online video to a television set. A connected TV is a television that can display online video via any means, including smart TVs, SMPs, game consoles, connected Blu-ray players, and connected DVRs.