The US television market accelerated its shift toward digital in 2019. As the decline of traditional pay TV accelerates in the US, SVOD continues to grow eclipsing its more expensive cousin. Meanwhile, vMVPD’s growth has fallen from the dizzying heights of last year while over-the-air TV continues to make modest gains.

2019 saw an acceleration of the decline in homes with cable, satellite, or telco TV 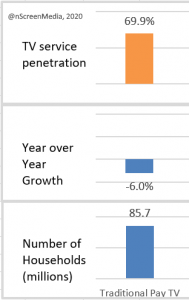 The outlook for 2020 is not good for pay TV. The entrance of traditional pay TV allies like Disney, WarnerMedia, and even the Comcast-owned NBCU into the SVOD market will reduce the time people spend with their traditional pay TV subscription. As well, the wide availability of much cheaper vMVPDs will entice more people to cut ties with their cable, satellite, or telcoTV provider.

The number of US homes with at least one SVOD subscription increased by 9.5% in 2019 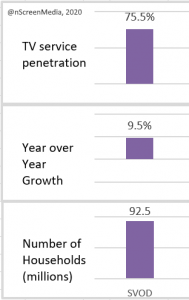 to reach 92.5 million. Three-quarters of occupied US homes now subscribe to SVOD services.

The SVOD market will continue to expand in 2020, though at a slower rate than last year. Disney+, HBO Max, and Peacock may entice people that have resisted the call to SVOD in the past. However, it is more likely that existing SVOD subscribers will expand the number of services to which they subscribe. In a recent consumer survey, Nielsen found the 93% of SVOD users planned to either add new services or stay with what they had. Just 3% said they planned to downgrade. 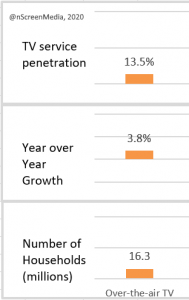 Last year, nScreenMedia forecast a small uptick in the growth of OTA households in 2019. Growth was 1.6% in 2018, increasing to 3.8% last year. In 2018, vMVPDs were very cheap alternatives to going to the trouble of buying and installing an OTA antenna. However, 2019 saw sharp increases in the cost of vMVPDs. For example, Hulu Live boosted prices over 20% last year. The higher vMVPD rates seem to have motivated more people to go to the trouble of putting up an antenna. Watch for a repeat performance in 2020, as vMVPDs continue to raise prices.

There are 9.1 million vMVPD subscriptions in the US, with a household penetration of 7.4%. Year-over-year growth has slowed dramatically from the heady heights of 2018, 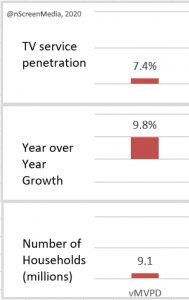 What’s more, there will be a substantial decrease in customer lifetime value at vMVPDs. To combat increasing prices, people will sign up for the duration of an event they care about and then cancel immediately after. Look for this behavior to spike during the 2020 summer Olympics.

This opinion gives you a complete picture of TV services in the US at the end of 2019.

It shows the number of households, penetration, and growth for traditional pay TV, SVOD, over-the-air, and vMVPD.

[i] Data gathered from financial filings by nScreenMedia