With 9-in-10 Americans either sheltering in place or spending more time at home, it is no surprise that TV viewing is way up. However, social distancing TV viewing impact favors streaming services over traditional TV viewing. 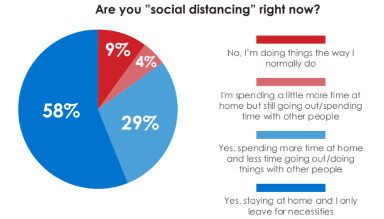 Hub reports viewing is way up across all TV platforms. The company asked users of each TV platform if they were using it more. About two-thirds of Netflix, Disney+, and Hulu users said they were. Significantly fewer (56%) said they are watching more video from Amazon Prime Video.

The boost in viewing is not restricted to the top four or five streaming services. Devin Emery, Head of Growth at CuriosityStream, reports the factual content streamer has also seen a massive increase:

“We have seen week-over-week growth in program viewership in the mid-double-digits over the past ten or so days. On Monday, March 23, we saw a greater than 30% increase in viewership compared to the previous Monday, which itself was more than 30% higher than the Monday before (3/9). So we are expecting to see sustained increases in engagement over the upcoming weeks.”

In other words, between March 9th and 23rd, CuriosityStream saw a 70% increase in viewership.

The lift in viewing is not confined to SVOD services. Jeff Shultz, EVP and Chief Business Officer at Pluto TV, reports that viewing on his linear ad-free TV service has grown dramatically:

Mr. Shultz says the service has also seen a double-digit lift in other categories of content, including binge-watch channels, entertainment and movie channels, and kids programming.

It could be because Covid-19 has heavily impacted many of the staples of traditional TV. Major sports leagues have canceled all games, and chat-shows have shut down. TV channels are scrambling, though some are merely relying on reruns to fill the time.

Fox Sports experimented with eNASCAR last Sunday. It broadcast NASCAR favorites like Dale Earnhardt Jr. and Denny Hamlin racing against each other at the iRacing virtual Homestead-Miami Speedway. The race was simulcast live on FOX broadcast network, FS1, and the FOX Sports app. An audience of 903,000 tuned in to see Daytona 500 winner Hamlin emerge as the victor. Fox said the iRace was the most-watched telecast on FS1 since the pandemic-induced sports shutdown began on March 12. It was sufficiently encouraged to commit to broadcasting the rest of the season. The next race in the eNASCAR iRacing Pro Invitational Series will be aired Sunday, March 29.

Perhaps efforts like Fox’s iRacing will inspire other broadcasters to experiment with new formats. If not, the steady diet of reruns and talking heads is likely to leave the audience cold and prompt them to transfer more viewing to online TV providers.

Hub data shows that social distancing TV viewing impact in the U.S. is huge, with a two-thirds increase for some top services.

The loss of critical genres like live sports and chat shows is likely hurting traditional TV, though programmers are starting to adjust.