Can Snapchat snap out of its growth slump?

Snapchat’s aggressive growth has stumbled in recent quarters. Competition and app interface problem could be to blame. Can the teen social giant return to its former winning ways?

The rise and fall of Snapchat

Most social media platforms rely on the accumulation of content. For example, Facebook stores all a user’s photos, videos, and statuses. Snapchat, however, was one of the first social sites to favor instant expression. In other words, posted content is current and not available for later viewing. Users post videos and photos that are available for 24 hours, and then they disappear. Followers can view the content only once in those 24 hours.

The focus on instant expression proved worked well for the company from the moment it was founded in April 2011 by Stanford students Evan Spiegel, and Bobby Murphy. Within just a year, users were sharing 20 billion photos on the iOS app and posting 20 million a day.

Since 2011, video has become increasingly important and is now the most popular format shared. By May 2015, Snapchat app users were sharing 2 billion videos a day. By February 2017, the app had 160 million daily active users. The peak number of daily active users occurred in Q1 2018 when 191 million users were opening the app each day.

Since then, however, usage numbers have started to decline. The latest data shows that the number of Snapchat’s daily users has fallen 3%, to 186 million. What is causing the decline?

The biggest problem Snapchat has had to face is competition. Instagram shamelessly copied Snapchat’s successful formal when it launched in August 2016. Not only did it copy the format, it even copied the name ‘Stories.’ Instagram Stories had an immediate negative impact on Snapchat’s growth. Moreover, within less than a year Instagram Stories were more popular than Snapchat. Currently, Instagram Stories have over 400 million daily active users, more than double Snapchat.

Many users of Snapchat are also angry about a recent change in the app’s interface. The update was intended to separate the posts users made for publishers and posts they made for their close friends. Some argued that the update was necessary to expand Snapchat’s user base, while others said it would alienate the core audience. However, the change was met by a storm of complaints. It also gave rise to a user petition – signed by over 590,000 people – demanding the social platform revert to the previous interface.

Despite challenges, Snapchat still strong with its core audience, for now

Young people, particularly Gen Z teens, make up Snapchat’s core audience. According to a Pew Research poll, 70% of US teens use Snapchat. More surprisingly, 35% say they use it ‘most often,’ more than any other social media platform, including YouTube (32%) and Instagram (15%). 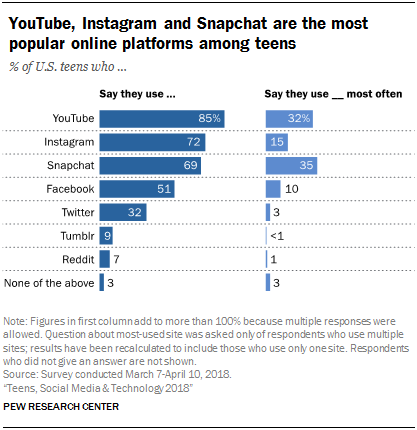 Dominating America’s teen viewing gives Snapchat much influence over a very important demographic. According to the company’s study, Gen Z kids spend $44 billion a year and influence an additional $600 billion in household spending.

The study also claims that 45% of teens say they are online ‘almost constantly.’ Snapchat intends to keep teens engage on its platform. According to Deadspin, it has ordered ten new original series from Buzzfeed and other major publishers. However, it is not clear if the move will be enough to reverse the recent declining trends. To do that, Snapchat may need to address some of its other problems.

Would you pay $26 a month for your local RSN?