The new Limelight State of Online Video Report highlights some unexpected behaviors that could impact how online TV provides prioritize and build their apps. The data suggests a robust mobile app could be a good investment, and focusing on the browsing experience might be more fruitful than beefing up the recommendations engine.

Smartphone most popular streaming platform, even at home!

People may prefer to watch on the biggest screen available, but convenience trumps size every time. Limelight asked survey participants how much of their online video viewing took place on the computer, smartphone, tablet, connected TV, or some other device. Participants used a scale from 0 to 4, with zero meaning no viewing and 4 meaning all. In previous years, the computer was the most used. In 2019, the smartphone became the most used, with an average rank of 2.08. The computer was second, with 1.87, and connected TV third with 1.64. The ranking of the screens was consistent across most countries covered in the Limelight report, including the U.S. One notable exception is in the UK, where people said they used the connected TV more than both the smartphone and computer.

This data might seem a bit confusing. After all, last week, nScreenMedia reported on Conviva data saying that 56% of all video hours streamed went to a connected TV. However, Conviva data focused exclusively on premium video. Limelight’s survey asked participants about all their online viewing, not just premium video.

The Limelight data strongly suggests people are watching a lot of video on their smartphones even at home. The company asked participants to say how much of their viewing took place at home, work/school, while traveling/commuting, or somewhere else. The home was the most used location by far in every country. For example, in the U.S., home viewing received an average score of 3.16, with the second most popular location, traveling/commuting, scoring only 1.09. In the UK, the home scored 3.19 and traveling/commuting 0.92.

The data clearly shows that when the impulse to watch strikes, nothing beats the convenience of the smartphone, regardless of the location.

Finding something to watch online is a manual process

In the free TV Universe report from earlier this year, nScreenMedia found that the video service app is the most critical tool for finding something to watch. Limelight’s data confirms the finding. 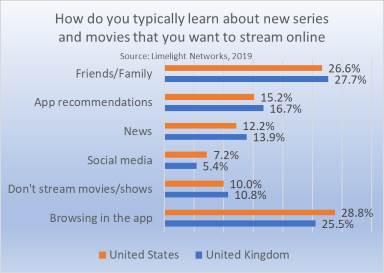 Across the nine countries surveyed, 27.3% said browsing the app of streaming service was how they typically find something to watch. Moreover, friends and family, not social media, were the next most influential. 22.4% said recommendations from friends and family was how they typically found something new to watch. Only 7.1% identified social media as a significant source.

Despite the massive investment in developing sophisticated recommendation algorithms, the technology scored surprisingly poorly with online video viewers. 18.4% said that service recommendations were how they typically found something new to watch.

Despite the considerable growth in connected TV viewing, the smartphone is still a critical viewing platform.

When looking for something new to watch, people still mostly browse in the app or listen to family and friends.

Social media is not a significant factor at all in new content discovery.